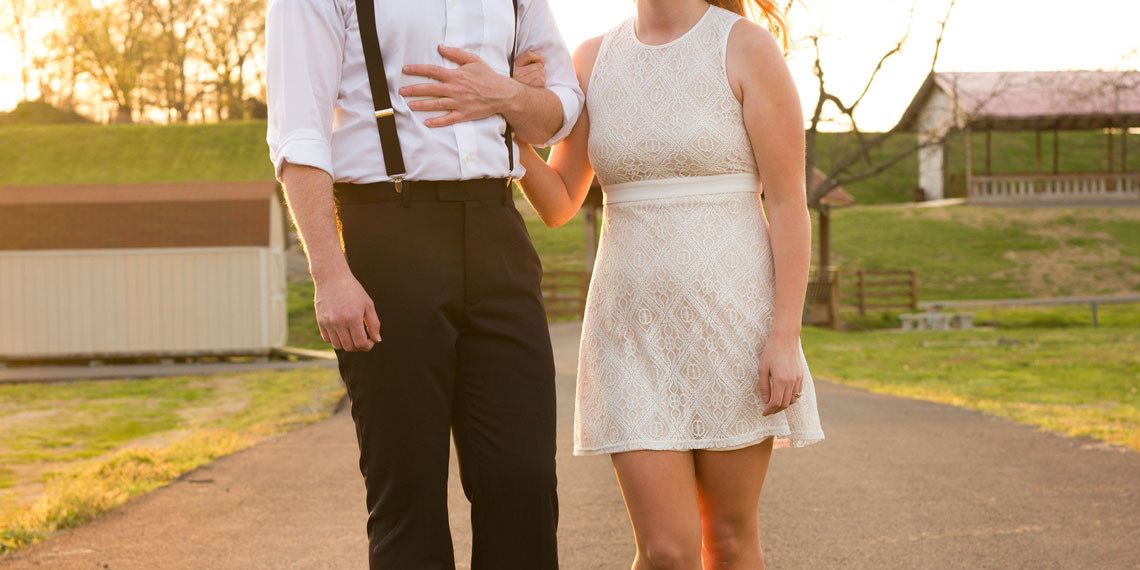 It’s become a bit of a stereotype when it comes to wedding planning that the groom is totally inept. Jokes are constantly made at his expense, from: “all he has to do is show up on the right day” to “just put him in charge of the music and we can handle the rest”. I’m no psychologist, but I think there’s some kind of self-fulfilling prophecy going on with grooms. Society thinks they want nothing to do with their own wedding and people believe that. But just like no white clothes after Labor Day, some myths are made to be busted. Here are a few easy ways to get your fiancé involved (does it still feel weird to say fiancé?):

1. Talk About Your Ideas

just thinking outside the box on this one, but it doesn’t sound like that bad of an idea | @jaimekessel

Instead of frantically pinning things to your wedding board after your fiancé drops to one knee, discuss what your individual visions are. If he says something like “I just want lots of booze and good food”, press him for more details. What kind of food? Does he want a signature cocktail? What kinds of appetizers should be passed around during cocktail hour? Despite what you might think, it’s doubtful he’ll say Bud Light and Cheez-Its—he’ll probably have some great ideas. And who knows, people might want Bud Light and Cheez-Its as a drunk munchie. Your fiancé might actually be onto something! Share your ideas with him as well and ask if he likes your ideas. I recently got engaged and when I showed my fiancé a tent option I liked for our reception, I was pleasantly surprised he had so many thoughts. We’d never discussed tent rentals before (obvi), but he felt strongly about what I’d picked. Even though we didn’t completely agree, I ended up liking his idea for an enclosed tent better than my open-air idea. I never would’ve known if I hadn’t asked!

2. Use The Multiple Choice Method

Chances are, this is the first time your fiancé has planned a wedding (or if it isn’t, we highly doubt he’s a trained expert—just a hunch), so it’s completely normal if he (or you) don’t know what you should be doing throughout the process. If you’re selecting, say, a caterer, pick out a few options and plan to meet with them to discuss menus, serving styles, etc. and then work with your fiancé to weigh the pros and cons of each. Instead of saying to him, “pick the food”, coming up with a list of options makes things less stressful and easier for him to say “thank u, next” to the vendors he’s not feeling.

3. Tap Into Their Skills

Here’s your weekly “how do I integrate tequila shots into my wedding?” post | @absoluteevent

Is your fiancé super handy? Is he a musician? Or does he have a really great sense of style? Think about what he excels at and give him a task that relates to that. If he’s a carpenter or architect, why not have him build a bar for your special day? It adds a pop of personalization to and it’s something you can keep forever versus giving it back to the event rental company. Every newlywed needs a stocked bar in their home, let’s be real. If music is his thing, have him work with the band or DJ to create a killer playlist.

This wedding is about you coming together in life (I know, it’s not about you and your wedding dress, hate to break it to you), so in that spirit, you should be deciding everything together. It’s a great test for all the future decisions you’ll have to make in life, but without the high stakes. Even something as small as the day-of timeline or where you’ll get ready should be a joint decision. That way there are no surprises or feelings of being left out when the day finally arrives. There’s nothing worse than feeling left out of your own nuptials.

if i had a dollar for every time i cursed while planning my wedding, i’d actually be able to afford my wedding

If you find yourself furiously screaming about the importance of having ranunculus flowers at the reception, try explaining the importance without starting a fight (save those for Bravo). Showing your fiancé why something is important to you in a calm, measured tone is going to have a much more successful outcome than a screaming match that will likely end poorly. Remember that down the line he’ll probably have something he desperately wants and you’ll probably rather have him explain why instead of demanding that you have it with no explanation and an attitude.

Let them know you WANT their opinion right off the bat. As soon as you get engaged, convey your excitement to start planning a wedding together. Even if it’s about little stuff you don’t think he’ll care about, like escort cards or charger plates. You’d be surprised how many men out there have a little bit of Martha Stewart in them. It might seem silly that you have to cheer them on like it’s a high school basketball game, but you can thank the “men hate weddings” stereotype for that one. You won’t regret getting your fiancé more involved.