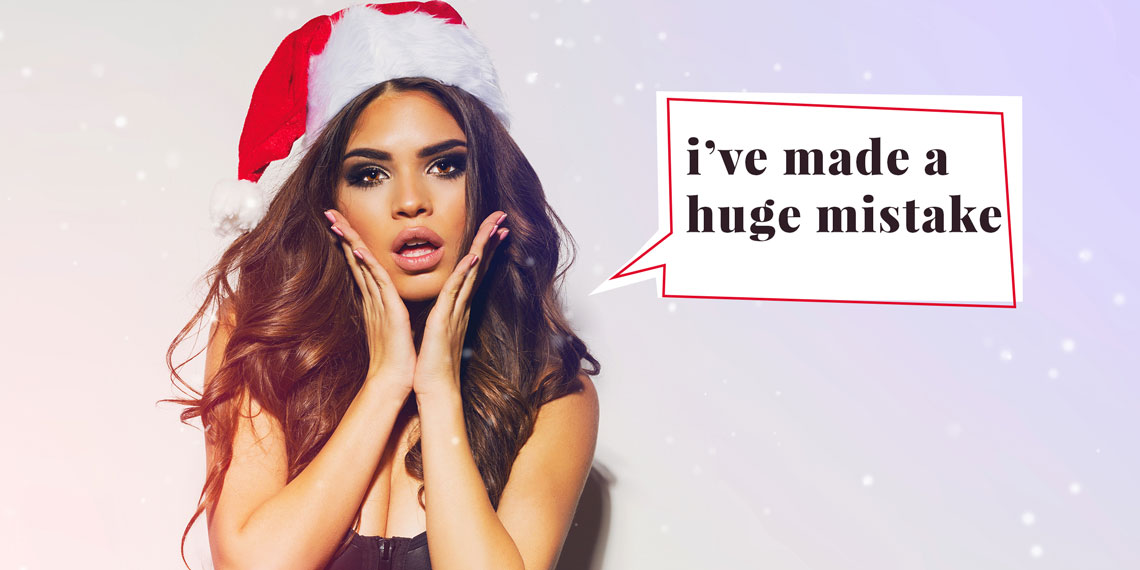 The 6 Stages of Santacon

Listen up, people, because a dark force is about to descend upon New York City this weekend, and that force is Santacon. For those of you who don’t know what Santacon is, it’s an event that takes place once a year where people dress up like slutty elves and puke on the streets—all in the name of Christmas! Normally, I’m in full support of any and all events that encourage you to black out before noon and dress up in costume, but Santacon takes this shit to a whole new and terrifying level. How do I explain this in simple terms? It’s like when God decides to test humanity, and we fail so miserably that She thinks about smiting us all and starting anew. Kind of like that, ya know? And if you think I’m exaggerating about this abomination disguised as a bar crawl, then just you fucking wait, because I’m about to break it down stage by stage for you, sort of like how Dante was kind enough to indicate the different circles of Hell. You’re so welcome.

This is the first—and most important—stage of the event. You’ve prepped for this stage by only having one drink last night saving your strength. You feel good, your liver feels good like the one you started college with. You have the costume, your day drink of choice, and the Insta filters that best compliment your slutty photogenic side. Everything is as it should be. Now, do you feel that hope? That absolute optimism? Hold onto this. Cherish these memories for when you’re hysterically crying because the dude in the shirt that says, “You can slide down my chimney,” didn’t want to feel you up in the Uber at the end of the night.

This stage occurs about two minutes after walking into the pregame. The outfit you thought made you look like a reason your grandmother prays for you sexy but cute now looks like you cobbled together pieces of fabric from the garbage, especially when you stand next to that Instagram model in line for the cups. And, on second thought, you probs shouldn’t have left your coat at home just so everyone could see the festive bra you bought just for today. What does hypothermia look like again?

STAGE 3: FUCK, I’M NOT DRUNK ENOUGH FOR THIS SHIT

Oh, you want to bar hop now? Even though I just opened a tab and we waited 45 minutes to get into this shithole of an establishment in 35 degree weather? K. These are the thoughts that will run through your mind after you and your squad descend upon the first bar supporting this godforsaken event. It’s at this point that you’ll start to question why you’re like this. After walking into the bar, your immediate reaction will be to back away slowly from the crowd of Santas aggressively singing Mariah Carey Christmas tunes and guzzling Bud Light. You can’t tell if the guys here are hot or not and if the gut he’s sporting is part of his costume or if he just has a dad bod. The bar, you’ll soon realize, is like something out of The Hunger Games. There are people swarming the bar the same way the Careers swarmed the cornucopia for weapons. You realize if you don’t start pounding vodka sodas soon, you might be the first cannon fired have to soberly interact with the man leering at you behind his Santa beard. May the odds be ever in your favor.

STAGE 4: DUCK I’M NOT FRUNK ENOUGH FOR THIS SHIT

Look, I’m not gonna lie; your only shot at coming out of this thing alive with your sanity intact is to black out as fast as humanly possible. Once you’ve reached this stage in the day, you’ve achieved your goal of getting blackout. Suddenly, everything you hated about the bar—the Mariah Carey Christmas music, the Bud Light spillage, the fact that you’re out in public dressed like Santa’s little hoe hoe hoe—is completely forgotten. You’ve made out with at least three Santas now—or maybe they were the same Santa? Idk. Honestly, it’s too hard to tell. You’re acting like this bar is your own personal thot playground, and you’re loving life. It doesn’t even matter that you accidentally flashed a nipple too much holiday cheer because THIS IS SO MUCH FUCKING FUN!!!

STAGE 5: THE BEGINNINGS OF A BLADDER INFECTION

Ah, my favorite stage. The one where if you don’t pee soon, you might end up with a small bladder infection. That’s when you realize leaving the bar and running back to Brooklyn to use your own bathroom at home might be the faster option. The line for the bathroom is longer than the one you waited in to get into this literal trap house, and it’s filled with angry bitches in Target onesies timing peoples’ pees. You wait through, like, 10 seconds of this before the desperation kicks in. You’re at the point where you’d trade your first born child rose gold iPhone for a spot at the front of the line because you don’t even care anymore; you just have to pee so bad, SO WOULD YOU PLEASE HURRY THE FUCK UP, PEOPLE.

Honestly, it’s best not to question yourself. The fact that for the last six hours, you’ve been grinding on some dude, who could be dressed as Rudolph or could just be someone who favors the color brown, is neither here nor there. Don’t think about how you almost pissed your leggings TWICE or that you drunk texted your hookup to see if he wanted you to “guide his sleigh tonight.” Nah. Don’t do that to yourself. Not now and definitely not tomorrow when you sober up and realize you spent $40 on pizza last night… for just you. In fact, it’s probably best if you try to black out the entire incident at least until next year’s Santacon rolls around, and then you can find new and interesting ways to hate yourself.

Until next year, betches.