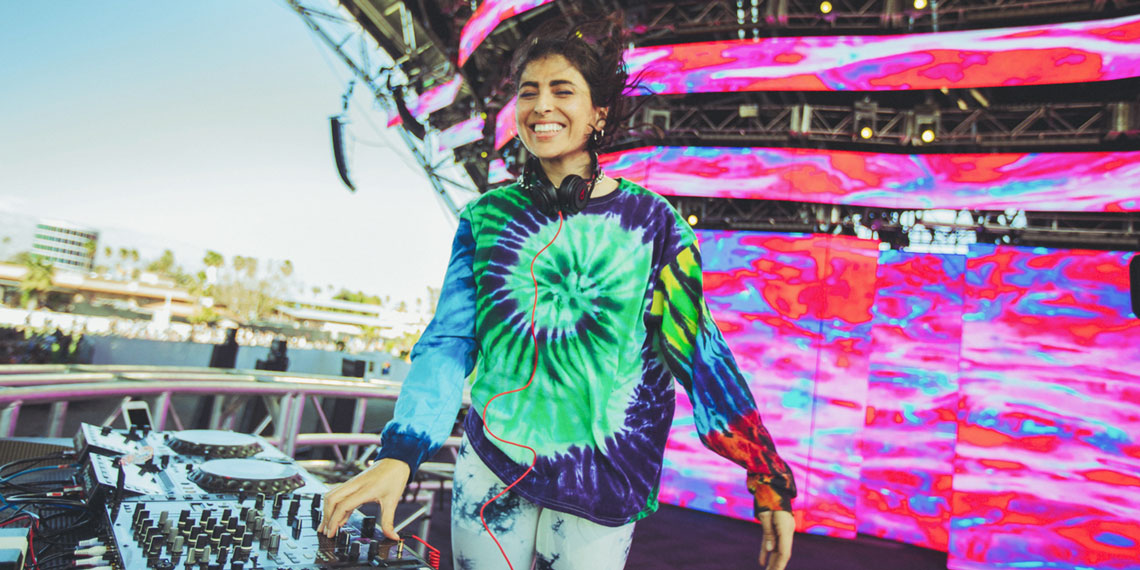 6 Coachella Essentials You Will Seriously Regret Not Bringing

If you are living somewhere with an internet connection, which I presume you are if you are reading this, you are aware that Coachella kicks off this weekend. Whether you’re attending for the first time or you’re a seasoned veteran who spends all year regaling your friends with tales from festivals past, it can be tricky deciding what to pack. You’re likely flying across the country, you may or may not be checking a bag, and still, you have to bring enough supplies to last you three days in a desert. (Why is this sounding like the Passover origin story?) Luckily for you, I’ve been to a ton of festivals (I even camped at Bonnaroo, so don’t question me) and attended Coachella last year, so I feel more than qualified to give advice on this topic. But if you don’t want to take my word for it, I teamed up with Anna Lunoe, an Australian DJ who’s already performed twice at Coachella, to help me come up with an essential Coachella packing list. (Anna is performing for her third time this year at the Sahara stage, so check her out). If you are a procrastinator who has not packed yet (same), here’s what you need to run out, buy, and throw in your bag. If you’re not going, Anna created a special mix just for Betches readers that you can check out at the end of this article.

This is where you think I will espouse some sh*t about not losing your friends, right? Wrong! There is no service at Coachella and you will lose everyone immediately, so share your location with your friends ahead of time and set up some meeting points and times like they did back before cell phones were invented. So what do you need a portable charger for? The Instagrams, DUH. Anna backs me up on this. She says, “Every year you will fall in love with the palm trees and lights again. Yes, that’s basic, but they are completely RIDICULOUS and there is a reason they are so universally loved.”

She’s not wrong—I’ve gone to more festivals than I can count, and what I love about Coachella in particular is that they really pull out all the stops to make it feel like you are in another world (specifically, another world with unparalleled backdrops for your Instagrams). Last year, there was this spiraling rainbow tower thing called SPECTRA that I’m pretty sure the entire attending population took photos in front of. It will be there this year, so no worries if you missed it last time. Plan your outfits accordingly! The only thing that can ruin your ~aesthetic~ is your phone dying. Tragic! So in order to avoid that, bring a portable charger! I found one from Sonix that’s super cute and provides 16 hours of extra battery life, so I don’t even have to charge it up every morning (but I still probably will because I’m neurotic like that).

Depending on how you look at it and your personal views towards fashion, one of the best or worst things about Coachella is that it’s half about the music, half about what everyone is wearing. That element causes me extra stress, but it also means I can indulge in my favorite activity: people watching. And I’m not alone. “Trends come and go, but an over-used trend is forever!” Anna says. “Personally, I would love to see the flower crown trend retire already. We’ve had enough.”

I can agree that flower crowns are a little overdone, and anyway, you should bring a hat (more on that later). Unfortunately, I’m sure we will see at least one flower crown at every single music festival until the day we all die (or the festival bubble bursts, whichever comes first). But one accessory that I am super glad made a comeback (mainly because I never got rid of mine from the 90s) are fanny packs. Whether you’re wearing it around your hips like God intended or as a crossbody bag, fanny packs are convenient, secure, and they fit all your sh*t. I rue the day they go out of style and people make fun of me for still having one. Anna actually made a festival pack for her fans, that comes with a fanny pack (bless), a fan, a collapsible water bottle, and temporary tattoos, which incidentally were the next four items on my Coachella packing list.

When I asked Anna for her Coachella packing list essentials, she did not hesitate to list off a number of sun protection items. “You need a hat, bandana, sunscreen, lip balm and a light sweater in your bag every day, no exceptions—the desert is no joke,” she says. “People often think they won’t need a sweater or bandana because it’s so hot, but it gets VERY windy so you need something to cover up and protect yourself from the imminent sand storms.”

This, I can personally attest, is a fact. Do not be the idiot who has to sit in the shade all day (lol, good luck with that) because you forgot sunscreen and are a lobster. Wear sunscreen, you idiot!! And, as someone from New York, I will say that it IS true that you DON’T feel the heat as much because it’s a dry heat—but that doesn’t mean the sun is not going to burn you, so reapply sunscreen regularly! One thing you don’t really need at other festivals but you absolutely need at Coachella, though? A bandana. Remember what I said about that dry heat? Yeah, that makes for a ton of dust, especially during weekend two, when the grounds have been stomped on by thousands of people the week prior. You don’t want to cough like you’ve got the black lung during a spontaneous dust storm, so get a bandana to keep around your neck. If you wet it, it will also keep you cool.

Not to brag (yes to brag), but last year at an after-party, I saw Kourtney Kardashian and Younes Bendjima. They were standing like, two feet in front of me, and I tried to take a stealth pic but failed miserably, so the only evidence I have that I saw them is a sh*tty video my friend took and a note I stored in my Notes app recounting my run-in. This year, I am prepared to gawk celebrities in a subtle way! In order to do this, I am bringing a pair of mirrored sunglasses so you can’t tell where my eyes are looking. Will Ed Westwick still probably know I’m staring at him? Yes. Will that stop me? No.

Anna is with me on the “look but don’t talk” philosophy of celeb run-ins. She says, “Celebrities are just like us! They love festivals, and if you see them you have to pretend like it’s normal that they are there. Bella, Gigi, Kendall and Kylie are all regulars at the festival and will stand out because they will be dressed way cooler than all of us. I hung out with Rihanna at Kendrick Lamar’s set once. And by hung out I mean we stood in the same vicinity.” I am jealous. If I were standing next to Rihanna, I would put on my mirrored sunglasses and pretend to take a selfie and hope she didn’t have security escort me out.

While the food may not be on your radar at all of things to do at Coachella, Anna insists it should be at the top of your list. She says, “We know you’ve been dieting so you can look great in that crop top, but Coachella has some of the best food trucks and vendors around, so live a little. Afters Ice Cream, Kogi, Magpie’s, Milk Bar, Ramen Hood, Sweetfin, Spicy Pie are some of my faves.” I’m not going to lie, I rarely ever eat the food at festivals—and if I do, I just choose whatever has the shortest line—but she’s convinced me to make an effort. Also, if she’s referring to the same Spicy Pie that’s at Bonnaroo every year, then I can tell you for sure it’s amazing.

However, while I’m sure the food is to die for, I’d also advise you bring a granola bar (or, if you’re me, five). By day three, the festival was so packed that you could barely move, let alone grab food anywhere without waiting on a line that probably would have lasted through multiple sets. On the last day, my dinner was two soft pretzels that I got at a pretzel stand across from the main stage because that was the only thing that wouldn’t have required me to wait for an hour. Let me tell you, it was worth it when I saw how long everyone else had to wait for a $15 slice of pizza.

Literally the one thing I f*cking hated at Coachella was their alcohol policy. Apparently, unlike literally every single festival I have been to, you can’t just walk around with alcohol?? Even if you are an adult who is well over 21 years of age?? You can only drink in these designated gated-off beer garden areas. So what ends up happening is you have to wait in line to get into the beer garden, then you have to wait in like to get your beer (or cocktail, or whatever), and then you have to drink it right there before you can leave the beer garden and see whatever act you want to see. This was, to put it mildly, supremely annoying. Now, I’m not advocating anyone break the rules or do anything illegal here. I will say that I wish I had a cool bracelet that can hold liquid like the one above. That’s all I’m gonna say.

While I have you, don’t forget a water bottle, hand sanitizer, and wet wipes or toilet paper. I don’t really remember the bathrooms being awful last year, but when thousands of people are using the same port-a-potties, they are bound to run out of supplies at some point, and you don’t want to get caught with your pants at your ankles.

And there it is! Your Coachella packing list. If it’s anything like my real packing lists, I’m sure I left out numerous essentials, like deodorant (which I once forgot on a trip to MIAMI of all places, it was truly a tragedy) and pajamas (which I forget on literally every vacation I ever go on). Let me know in the comments if I left out anything crucial! And even if you’re only attending Couchella this year, you can still feel like you’re part of it because Anna Lunoe created a special mix just for Betches readers. Check it out below!