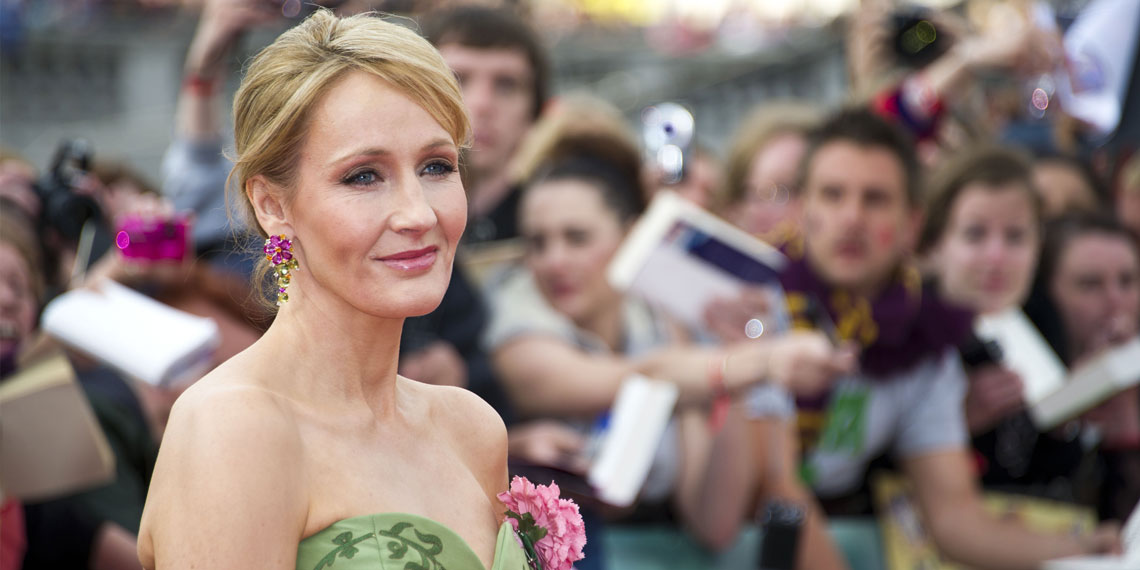 5 Times J.K. Rowling Tried To Ruin ‘Harry Potter’ For Everyone

When the Harry Potter series ended back in 2007, those of us who grew up with the series shed a little tear for the end of the wizarding world. Little did we know that all we had to do was fast forward like, 10 years, and J.K. Rowling would be providing us minute-to-minute updates on aspects of the Harry Potter series that not even the most depraved FanFictions had touched on. And no, I’m not talking about the announcement that Dumbledore is gay, which was actually cool (though it would have been cooler if that had appeared in the books like, ever). I’m talking about all the other random, bizarrely sexual sh*t that J.K. Rowling has revealed since the series ended.  As a Harry Potter fan myself, I had always hoped we’d hear more about some of our favorite unexplored aspects of the series *cough*Marauders Prequel*cough* but never once in the 20 years since Sorcerer’s Stone first hit the shelves did I wonder what wizards did with their waste before toilets. Now I know.

Here are just a few ways J.K Rowling has tainted what used to be a very wholesome series about children learning magic at magic school, for no other reason than I presume she was bored.

JK Rowling: I don’t think you get just how gay.

World: No, really, it’s fine with us.

But Dumbledore? I don’t care that he’s Jude Law now, Dumbledore is, and forever will be, grandpa age. In fact, Dumbledore is supposed to be approximately 150 years old during the Harry Potter series. I do not need to go back in time to see his younger self and find out that he and Grindelwald once boned in a house he was renovating. This is not The Notebook. I’m done.

Shortly after Harry Potter ended, J.K. Rowling unleashed Pottermore on the fandom, a website whose sole purpose was to tell you you’re in Hufflepuff even though you’re clearly in Gryffindor (I’m not bitter). Rowling has also used this platform to reveal new info about the series, some of which was fun (McGonagall was in love with a muggle!) and some of which was just weird. Back in 2016, Rowling used the site to reveal info about the various wizarding schools around the world, and to publish a short story about the American wizard school Ilvermorny. “Finally!” American fans thought, “A wizard school just for me!”

Wrong! Because once we found out the names of the American Houses, we were all already downloading Hogwarts transfer paperwork. They are: Thunderbird (A car), Horned Serpent (euphemism for penis), Pukwudgie (??), and Wampus (?????????). No to all of these. I’m not sure why these seem so much more fundamentally ridiculous than the words “Gryffindor, Hufflepuff, Slytherin, and Ravenclaw,” but they do. Personally, I think J.K Rowling is just too British to be naming American things. She doesn’t get how we roll. IMHO the American Hogwarts houses should be: Flag, Chicken Nugget, Gun, and Double Gun.

(Pottermore says I’m in Chicken Nugget, but I know for a fact I’m in Gun.)

3. The Time She Involved The Israeli-Palestinian Conflict

J. K. Rowling: Dumbledore voted for Bernadette Peters for the Tony Award for Best Actress in ’03.

J.K Rowling likes to get political on Twitter, which is fine because that’s like, the point of Twitter. But she definitely took it too far when she posted an essay saying Harry Potter would agree with her decision not to support a boycott of Israeli products. No matter what your personal opinion on Israeli politics is, I think it’s safe to say that Harry Potter did not have one at all. Harry Potter is not concerned with our muggle politics. He is concerned with fulfilling the prophecy, defeating Voldemort, and becoming the master of death. Like, if we’re gonna start giving Harry political opinions, then what does he think about Brexit? Does he believe in climate change? If so, can he use his magic to stop it? Can we get Hermione on this with a cooling spell ASAP?

Hogwarts didn’t always have bathrooms. Before adopting Muggle plumbing methods in the eighteenth century, witches and wizards simply relieved themselves wherever they stood, and vanished the evidence. #NationalTriviaDay

In perhaps the most bizarre revelation of all, J.K Rowling also took to Pottermore to tell us that before muggles invented toilets, wizards “simply relieved themselves wherever they stood, and vanished the evidence.” Yes, that’s right, J.K. Rowling says wizards used to sh*t themselves on purpose. Why would she tell us this? I don’t know. Why would wizards even deal with installing toilets if they could just vanish their piss and sh*t to begin with? I don’t know. Does this mean that wizards under 17 just sh*t themselves because they weren’t allowed to do magic yet? Or did this predate the Degree for the Reasonable Restriction of Underage Sorcery? These are important questions that now need to be answered.

5. The Time She Shipped Harry/Hermione

Harry and Hermione are lifelong friends. They love each other like brother and sister. It’s cool because it shows you that a man and woman can be friends, with no sexual component, and just have a relationship based on respect.

But J.K Rowling had to ruin all the platonic friend love when she told Wonderland magazine that it was a mistake for Harry and Hermione to remain just friends, and that Hermione and Ron were “not a credible couple.” Umm excuse me, but if annoying the sh*t out of each other for years and then realizing you actually just wanted to bone the whole time isn’t a “credible relationship” then WHAT IS MY ENTIRE LOVE LIFE?

NO ONE:
JK Rowling: Harry and Hermione had an affair.

Also can we not let Ron Weasley have anything? This is literally his horcrux nightmare come true. Also also, this is Ginny Weasley erasure. Plain and simple.

… but I’m pretty sure I’m the only person who pronounces it that way. https://t.co/HxhJ5XY5HP

This is false. I don’t care that J.K. Rowling technically invented Voldemort and therefore is the authority on how his name is pronounced—this is false. On that note, I also propose we all go back to pronouncing Hermione as “Hermy-own” à la Viktor Krum and/or me in 4th grade before I listened to the audiobook.

Look, J.K Rowling will always be a literary icon. She created Harry Potter and for that I am forever thankful, but for the love of God, please stop with these bizarre revelations and channel all this pent-up sexual energy into a Riverdale-style Netflix show about Hogwarts in the year 2019. Sh*t, you could put it on Pottermore behind a paywall for all I f*cking care. I would gladly pay money to see that. Take my money Jo, please.