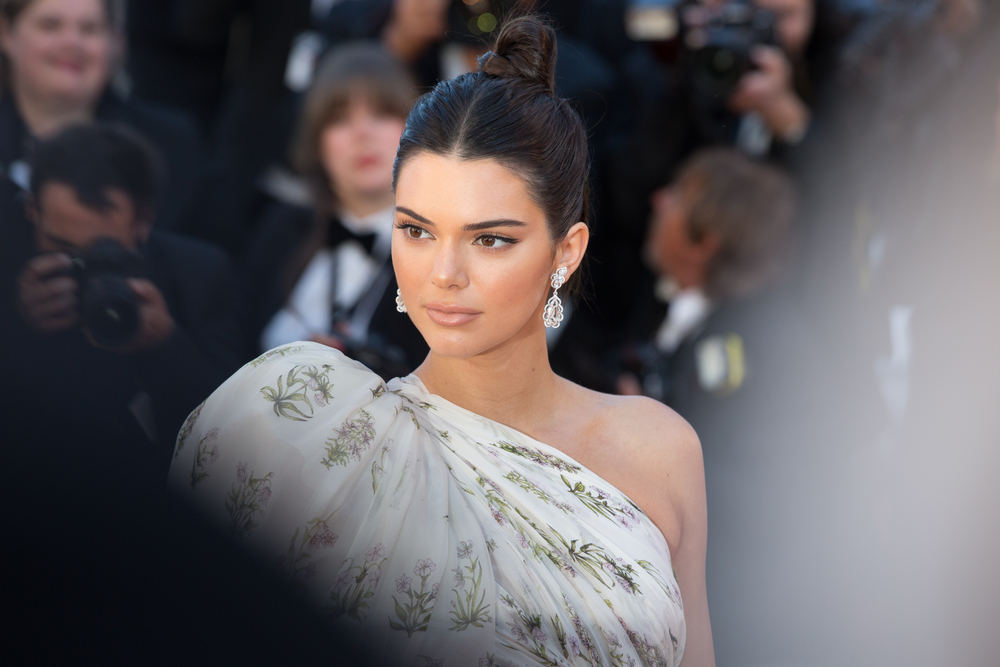 We’re almost halfway through 2018, and it’s really been a whirlwind year for Kardashian news thus far. Nothing can top a surprise baby or meeting Donald Trump, but Kendall’s love life is still making headlines of its own. Kendall is dating Ben Simmons, and I have a lot of thoughts. A few months ago,  I became deeply invested in her new relationship with basketball star Blake Griffin, but it appears Kendall has moved on to an NBA player who’s younger and hotter (feel free to fight me in the comments if you disagree).

Ben Simmons and Kendall Jenner were first rumored to be together on Wednesday, and then they basically confirmed it later in the day by hanging out together in LA. Also present at the hangout were top model Kaia Gerber (who is 16, ew) and Jordyn Woods, who at this point must be contractually obligated to hang out with a Jenner sister at all times. Jordyn was hanging out with her own NBA player, Devin Booker, but that’s not what we’re here to talk about. Ben and Kendall left together at the end of the night, which is obviously scientific proof that they are fucking. Don’t forget to use a condom, kiddos!

But if you, like me, don’t know anything about basketball except that Tristan Thompson is a piece of shit, allow me to fill you in on 5 things you need to know about Ben Simmons.

Ben Simmons isn’t like a regular basketball player, he’s a cool basketball player. By that I mean that he’s Australian, which objectively is the hottest accent. Fight me, French people. He moved to the US for high school (basketball player things), so he now has this crazy half accent that I can’t quite figure out. Oh well, guess that means I’ll just have to spend the next three hours watching interviews of him. I’m not that sad, considering that he’s also very pretty. He’s also 6’10”, which is an alarming height until you realize that Kendall is 5’10”. Oh wait, still alarmingly tall.

Since being plucked from the outback of Australia, Ben Simmons has really proven himself as a #baller. He played at LSU for one season before ditching school for the NBA (casual), and he was the number-one overall draft pick in 2016. That’s basketball speak for everyone literally being obsessed with you. He was injured for his first season in the NBA, but this year he’s been a star player for the Philadelphia ’76ers. Voting is happening for Rookie of the Year right now, and he’s considered one of the favorites. That is as much as I can say about basketball without sounding like an idiot, but he is clearly very good at his job.

3. He Was Literally Just Dating Tinashe

If your response to the name Tinashe is “who?” then please excuse yourself and come back when you’re properly educated. Tinashe is a very underrated R&B singer who is both talented and sexy, and everyone should know about her. She and Ben started dating back in March, but the timeline of recent events is very murky here. A source reported last week that he broke up with her for literally the craziest reason. She was accused of “doing Kardashian shit.” HELLO IRONY. The source said of Tinashe, “She is way too public with everything. They just started dating and this girl is calling up paparazzi.” AM I READING THE SAME THING YOU ARE READING OH MY GOD. In a wild thickening of the plot, Tinashe’s brother popped off on Twitter, saying that Ben just broke up with Tinashe on Sunday, meaning he was definitely cheating with Kendall. I need an inhaler right now because I CANNOT BREATHE.

Never met you before in my life. days after u break my sis heart u do this… ppl all lied on her talking fake news about my sis *doing kardashian shit * u cheat on her w a Jenner ???? DONOVAN MITCHELL ROY fuck nigga https://t.co/xjmm2E2mRq

4. He’s At Least The Fourth NBA Player Kendall Has Dated

In a family where pretty much everyone loves dating NBA players, Kendall like, really loves dating NBA players. Khloé usually gets all the attention for her basketball fetish, but Kendall has quietly been building up quite a roster of her own. She’s only 22, but Ben Simmons is already the fourth NBA player she’s been romantically linked to. She made big headlines earlier this year for dating Blake Griffin, but she’s also hung out with Jordan Clarkson and Chandler Parsons in the past. All of these men have names that sound like they were created by an algorithm, and they’re also all very hot. Kendall very clearly has a type, and I’m not mad about it.

As you already know, stalking who follows who in the Kardashian family is one of our favorite pastimes. There are endless social dynamics to investigate, and it’s the most fun whenever a new face is introduced. Ben Simmons sadly does not follow any of the Kar-Jenners on Instagram, including Kendall. Poor form, Ben. Everyone should really be following at least two Kardashians at this point, so this really seems like a conspiracy. Kendall is also not following Ben, so they’re at least putting 10% effort into keeping their relationship on the DL. Seems like it’s working!

And I’ll say this now before any of you (*glares angrily at Kris*) get any funny ideas: if Kendall ends up pregnant a month from now, so help me God, I will burn Calabasas to the ground.