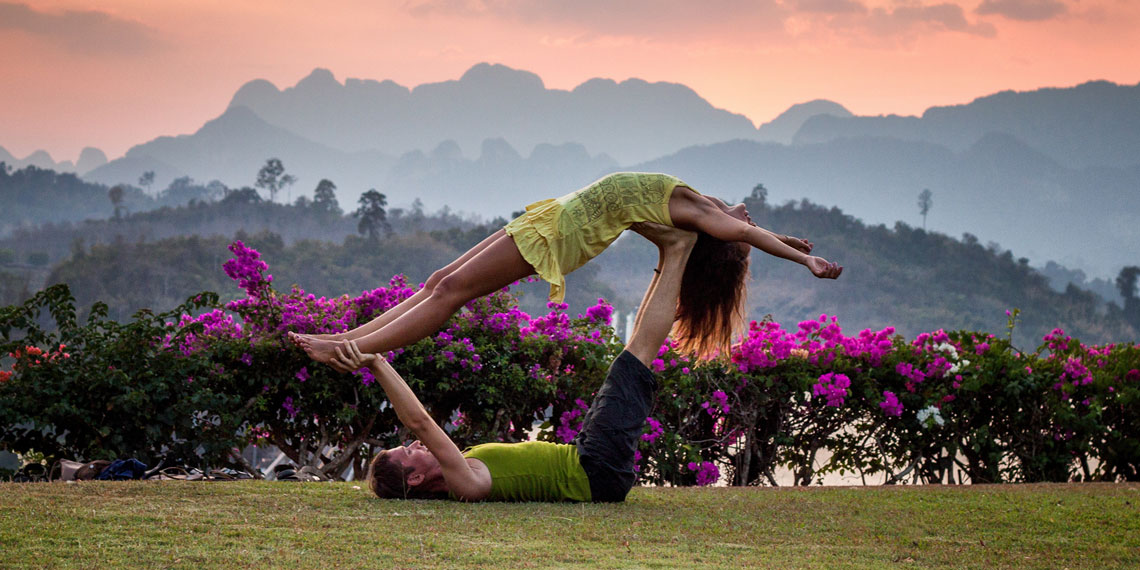 5 Sex Positions That Require Way Too Much Coordination & Effort

My frustration with women’s magazines is well-documented. However innocent the intention, their constant suggestions of how we can improve ourselves are at best, irritating and at worst, emotionally damaging. Some of the most egregious examples of this are the sex positions offered up by these publications, many of which seem to require the endurance of a marathon runner and the core strength of a yoga master. Because I live to troll am a very serious journalist, I’ve compiled a list of sex positions that need to be canceled yesterday.

This wouldn’t be a proper article on sex positions if I didn’t start with a gem from our friends at Cosmo. They suggest that we simplify standing-up sex by, you guessed it, squatting in a doorway. As one does. To be more specific, “For this pose, have your guy squat with his back against one side of a doorway. His thighs should be parallel to the floor, and he can put his hands behind his lower back for cushioning. Stand facing away from him, spread your legs so they’re on either side of his, and then back up onto his member.” First of all, the word “squat” has no business being a part of any sex position, ever. I only squat in two instances: ehen I have to pee over a questionable toilet, when I am torturing myself working out. Secondly, if I can’t get through the thighs portion of a barre class without resembling a human vibrator, what bro is going to be able to remain in a perennial squat for three minutes an entire sex session? Sex is supposed to be fun, not a gym session masquerading as an earthquake drill. Hard pass.

In case the name wasn’t enticing enough, allow me to paraphrase a position suggested by Women’s Health, of all places. The woman lies on her back with her legs in the air and pointing toward either side of the head. The man then SQUATS (*shudder*) and enters. You can tell that not even the writer of the article suggesting this farce is convinced, because the section telling the reader why it’s great warns that “our neck may get a cramp” and advises you to have your partner “go easy on the thrusts to avoid too much pressure on your upper body.” Hot! Not only will your partner look like a colonial woman on the wing an angry Amish man, if you’re both not super careful you’ll be just one neck spasm away from kickstarting the reboot of Sex Sent Me to the ER!

This suggestion by Glamour is the sex position equivalent of two people I despise having a baby. Standing-up sex has never been my thing because I’m extremely lazy busy, and I’m not convinced that people actively choose to 69 anymore (if they ever did). So, the Standing 69 sounds about as necessary as Ivanka Trump’s presence at a meeting of world leaders. If that’s not enough of a deterrent, it requires a level of athleticism that I simply do not possess: “One person stands upright, and the other goes into a handstand while the other holds them. This should allow you both to reach each other’s naughty bits, but you may have to cut it short before all the blood rushes to your head.” I love the casual “goes into a handstand” that they’ve thrown in there, as if it’s as easy as a quick flick of the wrist. For those who don’t have a crippling fear of being upside down, you just have to achieve orgasm before inducing a brain hemorrhage. Easy peasy lemon squeezy.

Okay, so this isn’t technically a sex position, but this one is so absurd that it deserves inclusion on this list. According to the experts at Redbook, you should do the following if the guy you’re with does not want to wear a condom: “Try saying this: ‘But, baby, I need to practice putting them on with my mouth.’ Men love this. Let him know it’s an old hookers’ trick.” There is so much to unpack here. One, the term we are using nowadays is “sex worker”. More importantly, if you need to use a condom and your partner gives you a hard time, rather than using some weird seduction technique involving the term “old hookers”, you should just make sure you never give him a hard time ever again. Also, I have no earthly idea as to why anyone needs to spend time learning how to put a condom on sans hands. Personally, I’d rather use that time learning another language or, like, how to code, but call me crazy. Finally, this is simply something men can and should do on their own. It’s not enough that we live in a society where we are encouraged to remove every errant hair, wear underwear that rides up our asses, lose weight, and edit our photos to cover up any semblance of an imperfection with makeup; now we have to put the condoms on too? GTFO.

For a cute take on the classic wheelbarrow position, Cosmo suggests you do a forearm plank while simultaneously lifting one leg in the air as your partner enters you from behind, adding, “because this one requires a degree of balance and stretching ability, you’ll first want to be really careful that nothing hurts or feels off when you do it.” Why these sadists feel the need to make every sex position a thinly veiled bootcamp class is beyond me. I’m all for the idea of sex as a little light cardio, but I’ll save my stretching and balance practice for my ClassPass membership, TYVM. The gym and sex are my church and state, Cosmo, so you can go shave your back now take your suggestions elsewhere. And it’s 2019: everything hurts and feels off.

When it comes to sex, enjoying yourself is paramount. If any of the above sex positions sound appealing, you clearly have several Iron Mans under your belt go for it. If not, there is nothing wrong with sticking to what feels right for you and your partner. Sound off in the comments with any other sex positions you think are extra AF.