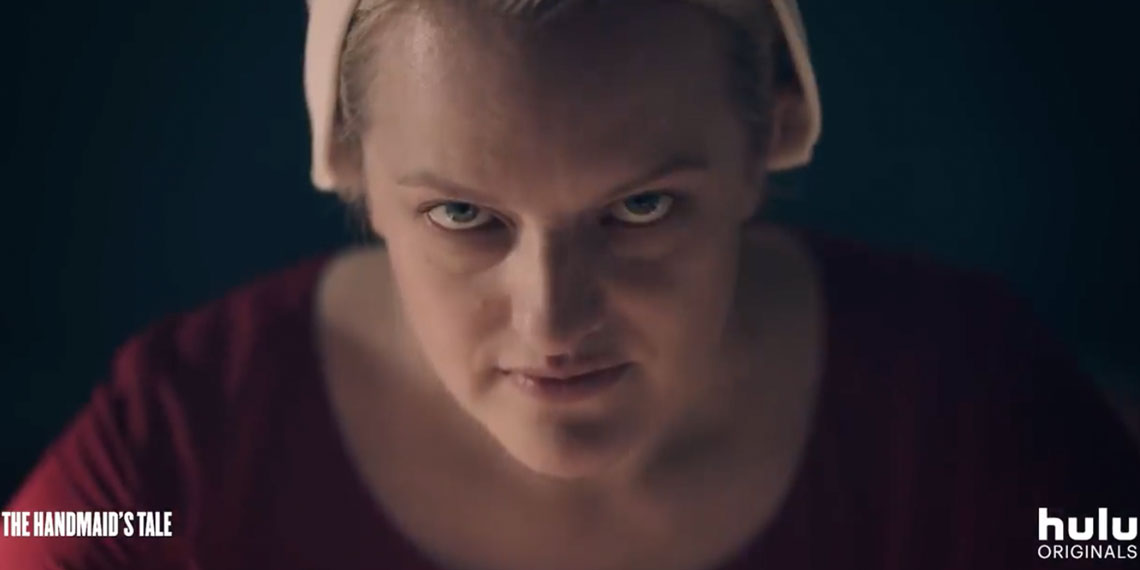 5 Predictions We Have For ‘The Handmaid’s Tale’ Season 3

Blessed be the fruit! The Handmaid’s Tale season 3 is upon us and I, for one, am very excited to get back to traumatizing myself for an hour every Wednesday. In typical Handmaid’s Tale fashion, the newly released trailer features some cryptic voiceover by our girl Offred (June if you’re nasty), and some very tantalizing clues as to what may happen next season. After watching approximately 10,000 times, here are some predictions…

1. Offred Moves In With Commander Lawrence

I mean…she can’t go back to the Waterfords, and his handmaid just escaped, so it’s kind of perfect, no? The trailer shows multiple shots of June in with Commander Lawrence (aka Zaddy) in his house, and we know as of the season two finale that he’s a good guy (despite the fact that he created the colonies) so this just makes logical sense. What doesn’t make logical sense is that Offred appears to be chilling in public in both Handmaid and Martha attire with no disguise, even though she must be the most wanted woman in the whole country? Like, what is this shot of her just standing in the middle of a government building like it’s NBD? Do these people not realize they are in the presence of OFFRED, the Beyoncé of Gilead? I am confused.

What Serena Joy has lost in fingers she will make up for in good deeds this season. SJ began this transformation at the end of season two by giving June the baby, but does one measly baby-handing-over make up for the fact that to get said baby she masterminded the assault of a pregnant woman? I think not. In the trailer, we see a flash of Serena when June talks about “powerful allies,” so I think it’s safe to say Serena will be working for the #Resistance and trying to create some much better Karma for herself next season. The trailer ends with a shot of her and June enjoying a cig by the pool, so it looks like they’re going to collab on a big project very soon (see item #5 for my guess as to what that may be…).

The biggest spoiler from the trailer is that Aunt Lydia is, apparently, alive. Unless that shot of her is from a flashback, which I think is unlikely. She seemed pretty f*cking dead last we saw her, considering Emily stabbed her, pushed her over a bannister, and kicked her down the stairs, but I’ve watched TV long enough to know that no character that dies in one season’s finale isn’t actually dead until it is confirmed in next season’s premier. I predict Aunt Lydia’s brush with death will end up being the thing that turns her good, and will give us more insight into how she became the Dark Doula of Gilead.

4. The Waterfords Get A Lamp

May the Lord open a goddamn window in this bitch!!!!! This is less of a prediction and more of a sincere hope, but now that the Waterfords have to rebuild their house I hope they use that opportunity to buy a goddamn lamp. People complained about the Battle of Winterfell on Game of Thrones episode being hard to see, but every scene at Chez Waterford is like a sensory deprivation tank. I’m just praying that the well-lit pool room at the end of the trailer is in the Waterfords’ new house so that Serena Joy can get some much needed vitamin D on that finger nub. Please, Hulu. I want to be able to see everything when she and June finally kill Mr. Waterford.

Which brings me to my final prediction…

I’m sorry, but this motherf*cker has got to go. It may be wishful thinking, but I am predicting that Serena and June tag-team killing Mr. Waterford this season and resume their old job of pretending to be him in letters. Between the multiple assaults, domestic violence, letting the government cut off his wife’s finger, and the fact that he revealed last season he does not know how to make tea, this character is done. I know he’s a main character but if Game of Thrones could kill off Ned Stark, Handmaid’s Tale can kill this gangly-ass Bible-thumping Harvey Weinstein. End of rant.