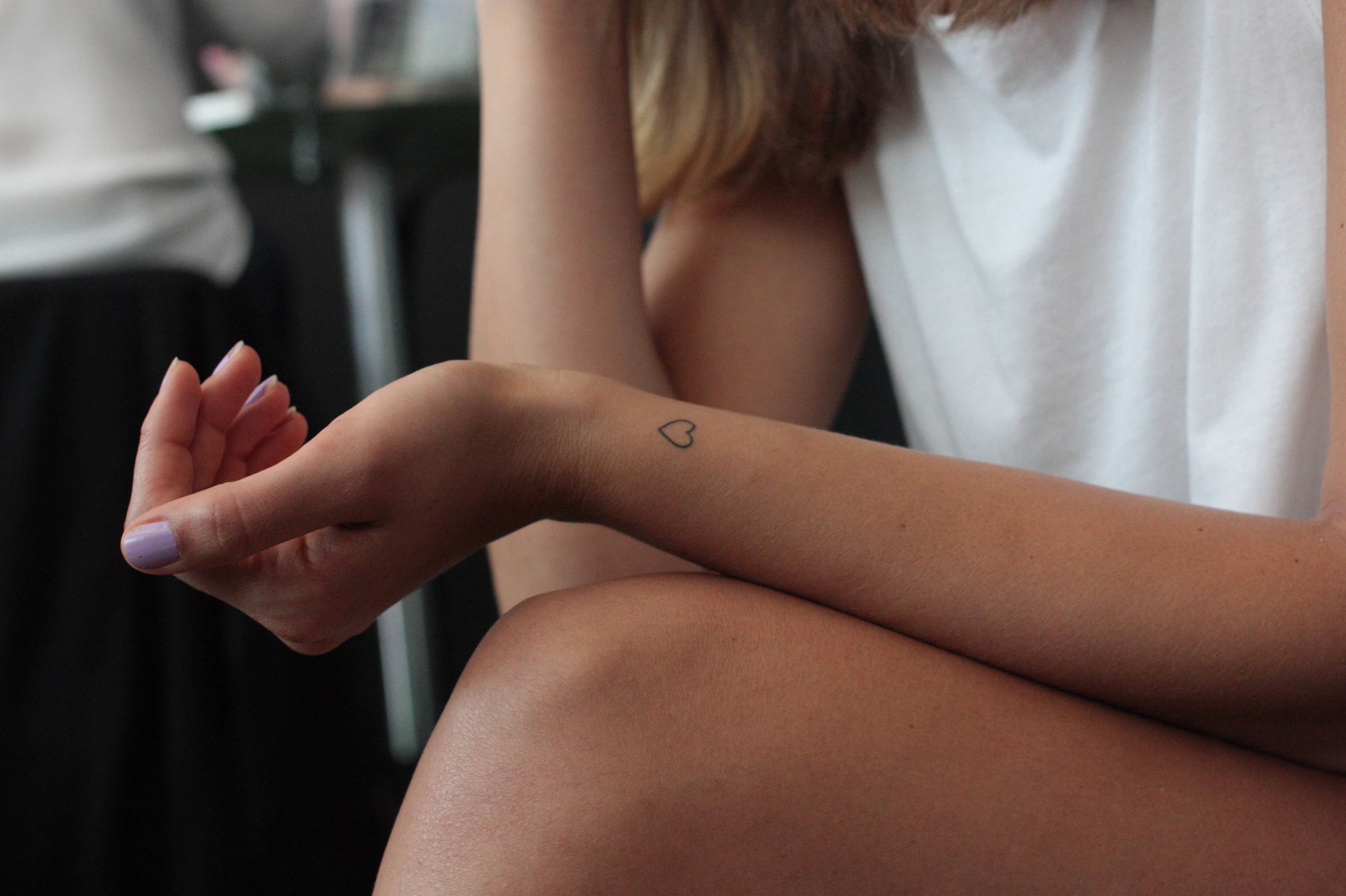 5 Mistakes To Steer Clear Of When Getting Your First Tattoo

To the surprise of literally everyone I know, I got my first tattoo last weekend! Here’s the story: I have always thought tattoos are cool, but I never bought into the idea of memorializing something important to me with one. Like, I don’t need to get a tattoo of my favorite city to remind myself that I lived there—you know? So I got a tattoo simply because I wanted one, knowing full well that it wasn’t going to mean jack sh*t beyond “this is pretty.” And I am totally happy with that.

My tat is a tiny outline of a heart on the underside of my wrist. I knew I wanted something little because a huge tattoo just doesn’t really go with my general nice Jewish girl vibe, and because if it really hurt, I wanted it to only last like, two minutes. Am I an adult with the pain tolerance of a newborn? You betcha! So if you’re thinking of getting a tattoo, please take the advice of someone with zero regrets and quite a few f*cks to give. These are the mistakes to not make when getting your first tattoo, but could apply for any tattoo.

1. Don’t Get A Cheap Tattoo

My tattoo is literally the size of a pencil eraser and I still spent $100 on it, which I initially thought was absurd. Yes, I live in Manhattan where prices are more inflated than Kylie Jenner’s ass, but a crisp Benjamin for a centimeter of ink? Surely that’s got to be robbery, yes?

No. After doing as much research on this as I did on my thesis in college, I discovered that any good tattoo parlor should have a start price of around $100 (in New York, at least), no matter how small the tattoo. I Yelped all of the cheaper places ($50 and below start price) and they got horrendous reviews. It’s almost as if… you get what you pay for? Of course, there are always exceptions, but when it comes to getting something permanently placed on your body, just pay a little more to ensure it’s exactly what you want. Generally cheaper places use less skilled artists and cheaper ink, which is just a bad combo and leaves a lot of room for mistakes. The lower grade ink, which your body breaks down faster than really good ink, will fade pretty quickly, and on top of that, bad quality ink can bleed over the original lines and smear. Gross. All in all, the last time you want to cut corners or get a Groupon is when you’re getting something stabbed into your body forever. (More on the stabbing shortly.)

2. Don’t Listen To Your Friends

Go with your gut and do everything in your power to not ask for or listen to other people’s opinions. The one benefit to telling people you’re getting your first tattoo is that they’ll hold you accountable and make sure you actually go through with it, but the downsides outweigh the one upside. That’s because everybody has an opinion. Do your best to get what you wanted where you wanted it when you first decided you wanted to get a tattoo. I knew I wanted it on my wrist, but as I was standing there waiting for the stencil to be done, I started having doubts and tried to convince myself that I wanted it on the crook of my arm or behind my ear, so I asked my roommate what she thought and then my brain exploded and it was not pretty. Anyway, guess where it is? It’s on my wrist because that’s where I originally wanted it. Going with your gut is generally life’s main rule, but in the case of getting your first tattoo, it’s especially true.

Getting a tattoo is essentially a cute collection of tiny stab wounds that are marked with ink so that you can never forget about that time you paid a lot of money to get stabbed by a professional stabber. Thus, a fresh tattoo is an open injury that needs to heal properly or it will look ratchet as hell down the line. For my little tat, I was instructed to keep it covered with a bandage that the shop gave me for a few hours, then gently wash with unscented soap and moisturize with an unscented moisturizer. I used Dr. Bronner’s soap and a tiny bit of Cetaphil, and I am pretty happy with what’s happening on my wrist two days later.

After a few days, the ink starts to scab over and peel on its own. Don’t pick at it! If you pick at it, you will accidentally pull the ink out. Generally, aftercare is a little more crucial for bigger tattoos, but either way, it shouldn’t be ignored if you want to get and keep what you paid for. Can we also acknowledge that my nail polish looks 100 after four days?

4. Don’t Get A Huge First Tattoo

Look, if you’ve never gotten a tattoo before, don’t go big on the first one. Start small, like Maui in Moana did, and make sure you’re into the look and experience before going bigger and/or getting more. Honestly, because it didn’t hurt at all and it’s the literal cutest thing I’ve ever seen, my first tattoo is going to be my gateway to more, and that’s totally fine with me. Starting small is never a bad thing when it comes to most things, anyway. A friend of mine got a stick-and-poke (the OG tattoo method) of a giant bird on her thigh—and guess what? It’s kind of ugly and she doesn’t love it. She also struggles to cover it up because it’s huge. Yikes. Getting a large tat is never a bad thing if it’s what you want, but for your first tattoo, you won’t really have a sense for what’s what, so starting small is the move.

No matter how lazy you are with work, the shop where you’ll get your first tattoo is one piece of research you should definitely do. Every shop is different and specializes in different styles and techniques. Mine was so tiny that I assumed it’d be really hard to screw up, but after beginning my research binge, I learned that for something so small and dainty, I had to go to a parlor that offered a single-needle machine, which a lot of places do not. And if you’re getting a really intricate design with a lot of shading, you basically need to be on the hunt for Michelangelo, because that stuff is a true art form that can very easily look horrible. Take the time to read reviews and check out different Instagrams for actual examples of the place’s work before booking an appointment or walking in. If you like what you see, reach out and ask questions on questions.

I know I literally just said to ignore anyone with an opinion, but I didn’t mean ignore the expert. I originally wanted a tiny, filled-in heart with red ink and walked out with a tiny, outlined heart with black ink. Why? My artist, Joel at Fun City Tattoo, basically told me that red ink gets broken up first, meaning it will fade really fast. He also said getting a tiny shape in red on my wrist will likely look like a really infected bug bite, which was 100% not what I was going for. After he suggested doing black ink and not filled in, I thought about it for a bit before remembering that he is an expert and I have no idea what the hell I’m talking about, so I should trust him. If you can’t tell, I am obsessed with his work and he was totally right.