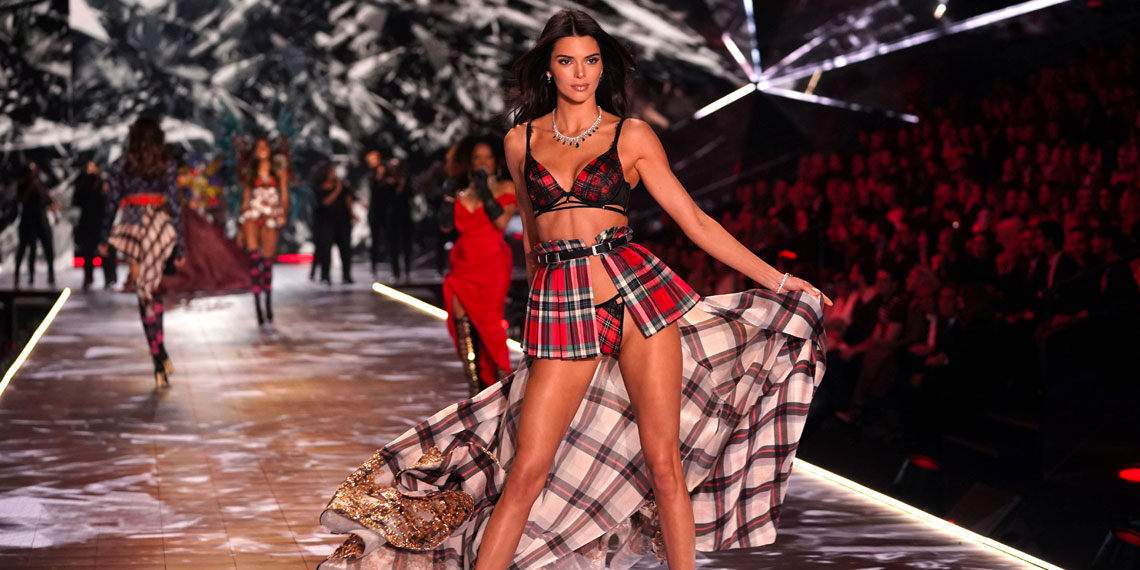 Pour your zero-carb appetite suppressant out for the Victoria’s Secret Fashion show, which was officially canceled yesterday in a statement by their parent company, L Brands. Apparently, the VS fashion show is taking the year off to “evolve the messaging” of the brand, aka to consider working with people who are not six foot tall cis women that weigh the same as an apple. In the #MeToo era, it comes as no surprise that a show as blatantly male gaze-y as the VS Fashion Show would have to rebrand (also, model Shanina Shaik leaked the news to the Daily Telegraph back in July). As someone who, for whatever reason, found herself watching the Victoria’s Secret Fashion show year after year, the news is bittersweet. Sure, I won’t be subjected to a parade of damaging body standards that leave me seriously considering an all-soup diet, but I also won’t get to see Kendall Jenner wearing a space bra covered in glitter.

Obviously, I’m kidding. I will not miss wasting three hours on this event, which I inevitably would have done because I’m a sick millennial who is addicted to screens. But in honor of this iconic show’s demise, here are five iconic lies they’ve told us over the years. Here’s hoping the Hadid sisters use the show’s end as an excuse to let loose and try a piece of cheese.

1. This Is What Normal People Look Like In Underwear

Let’s be clear: I’m not saying that nobody looks like this. Some people do! And all 20 of them are in the Victoria’s Secret Fashion Show. Yes, there are a blessed few who pop out of the womb with the genetics to be 5’10 and 119 pounds, but for most of us, that is just not happening. And for the people who are 5’1o and 119 pounds? Yeah, they mostly don’t look like this:

Anyway, back to watching Netflix on my couch wondering why I don’t have a six pack even though I went to the gym for 20 minutes three months ago.

2. This Is An Appropriate Costume

Yeah…don’t do this. Don’t even think about doing this. Unless you’re actually Native American*, in which case do whatever the hell you want. You’ve been through a lot. This photo is of Karlie Kloss from the 2012 VS Fashion Show, approximately 500 years after Columbus sailed the ocean blue and made this not okay to do. (Rhyme intended.) Funnily enough, Karlie stopped walking for VS in 2014 after “studying feminist theory” at NYU and realizing it sent harmful messages to young girls. Models! They’re just like us! (Getting woke after taking one women’s studies class in college.)

Also, anyone who wants to comment on this post saying VS was just trying to “honor” Native American culture is welcome to do so, but they also legally must Venmo me $12. Call it an ignorance tax.

This photo is from last year’s show, where a 37-year-old Adriana Lima walked her final runway. Now, I’m not saying that a woman in her late thirties can’t be a gorgeous, sexy, sensual being in the prime of their life. But what we see above is an actual abomination of nature. A gorgeous abomination, sure. But an abomination nonetheless. For reference, here is what I, a 29-year-old woman, will look like in exactly one year talking about the time I went to Bonnaroo:

Time is a cruel mistress.

#TBT to a little over one year ago, when Victoria’s Secret was forced to issue an apology after Ed Razek, the guy literally known as “the man behind the Victoria’s Secret Fashion Show,” said he would never allow “transexuals” (his word, not ours) to walk the catwalk because the show “is a fantasy.” He then went on to say the same thing about plus-size models.

Anyway, Razek left L Brands this August, and shortly before his departure, Victoria’s Secret hired Valentina Sampaio (pictured above) as their first trans model. You simply love to see it.

5. This Is What Running Into Your Ex Is Like

We couldn’t talk about the VS Fashion Show without mentioning the iconic moment, also known as “the only good thing that happened in the year 2016.” Let’s set the scene: Bella Hadid and The Weeknd had been dating for a year when they split up just a month before Bella’s first-ever VS Fashion Show. They were then reunited live on stage as Bella made her VS debut looking like a low-carb snack. And thus a million revenge fantasies were born.

Unfortunately, a moment like this is not available to the vast majority of the population. For us non-models, reuniting with an ex looks more like running into them with their new girlfriend while we are making a tampon run in old sweatpants. But this moment was amazing television, and almost makes the 23 years of toxic beauty standards and bad body image worth it. Almost.