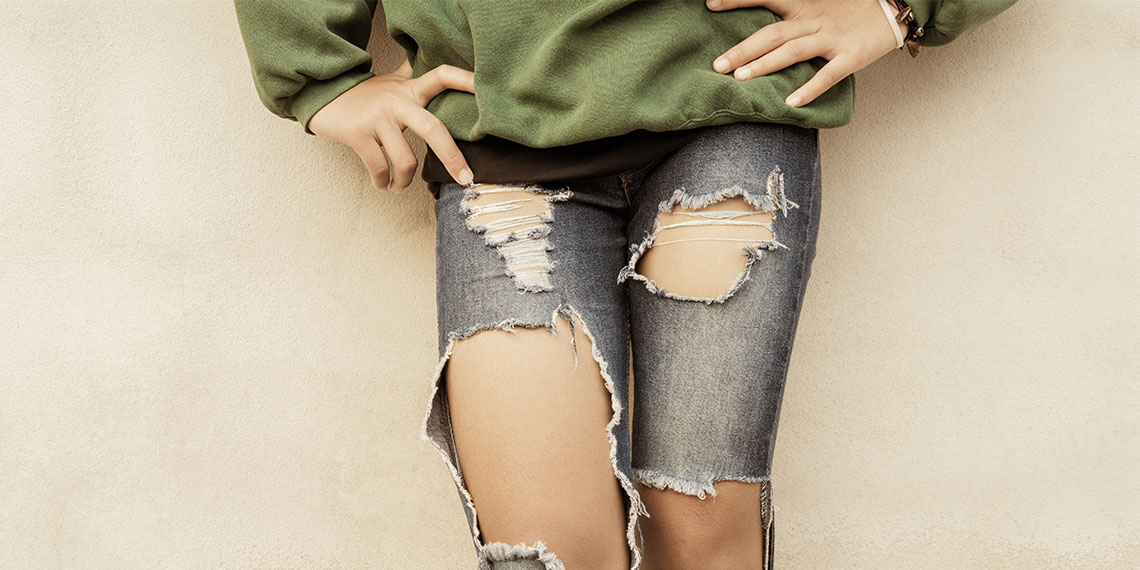 I don’t really fancy myself a fashion guru—in fact, I’m currently wearing a less than flattering sweatshirt-and-cowboy-boots combo—but there are some pieces out there that even I can say, with absolute certainty, are stupid. Look, as a youth living in New York, I am generally unfazed by most things, but some of the outfits that walk by me every day are too awful to forget, and they deserve a shoutout on this sh*tlist. Before you call me judgmental, let me just tell you that I know I’m judgmental and I simply don’t care, so joke’s on you. I’d also like to say that I’m not out here judging people who have bad taste or don’t know how to wear bootcut jeans because, let me remind you, I’m wearing a sweatshirt to work today. No, I’m judging the people who think they’re being really stylish by wearing something that’s objectively stupid—like sleeveless hoodies. Please.

So without further ado, read on for the dumbest moments in fashion.

The whole point of a sweater is to be cozy, so why in the fat hell would you wear one that’s both thin af and completely see through? As someone who pushes the company dress code like I’m getting paid to test limits, I totally understand the desire to be a little extra, but a sheer sweater just doesn’t make sense and that is a damn fact. There are so many ways to do sexy the right way, but a sweater thinner than a pair of CVS tights isn’t one of them. What about a cropped sweater and high-waisted jeans? Or even an off-the-shoulder sweater? There are so many solid options that don’t involve literally freezing your tits off.

Like most horrible things in this world, Justin Bieber is to blame for sleeveless hoodies. First of all, hoodies are not flattering, like, ever, and removing the sleeves doesn’t help. The only thing hoodies are good for is keeping you warm, so a sleeveless hoodie makes no sense whatsoever. It’s like the fashion equivalent of a sandwich with no meat: unnecessary. After doing some research (a quick Google search), I’ve noticed that most sleeveless hoodies (gag) are part of a workout outfit, which is almost worse than wearing one out and about. No matter the season, you sweat a ton when you work out, so do you really want to tap it back in a f*cking sweatshirt? I think not.

Technically I’m 26, but my affinity for bathrobes and slippers indicate otherwise. Let me just point out what I thought was obvious so that I can bask in how stupid these things are: the whole point of slippers is to be cozy, so why would anyone buy and wear a flip-flops version?? Also, not to be a snob, but the only two places flip-flops are an acceptable choice of footwear are on the beach and in the nail salon. That is it. Like everything else on this list, the weird edits to the original style (a closed slipper) totally defeat the purpose. These wouldn’t make sense even if they were cute, and uh, they ain’t that cute either. Instead, go for one of these cute snow boot options that will actually keep your toes warm.

Look, I stan a good ripped jean, but there is something about the Khloé Kardashian-esque ripped jeans that are an assault on the eyes. I’m talking about the ones whose hole starts in the upper thigh region and literally ends at the ankles. I mean, why? They serve zero purpose except giving the people around you something to laugh at, so unless you’re just out here trying to make the world LOL, go for normal ripped jeans. I know it’s ~fashion,~ but that doesn’t mean it’s a good look. And if you absolutely can’t resist a pair of denim like this, please save your sanity and do NOT wear them to a family function. Your dad will have a f*cking field day making fun of you and asking if your knees are cold, which they probably are. Next!

That’s right: boot pants. Balenciaga is generally not my cup of tea because I don’t like confusing, overpriced, neon-colored tea, and these weird boots (pants?) are a perfect example of why I can’t get behind the brand. First of all, what are they? How do you put them on? How do you PEE? Secondly, they’re so aggressive that if you must wear them, you can really only get away with them once, maybe twice if the second time is a full decade later. I’m all for bold choices, but these are just too much and I stand by that statement. And at nearly $3000, the price is DEFINITELY too much. This isn’t like that time Her Royal Highness Michelle Obama wore those glittery Balenciaga boots and the world truly lost its mind, because those were insane in all the right ways. These boot pants are just insane the way Spencer Pratt is insane AKA there’s nothing cute about it.

Do you agree that these pieces need to be burned at the stake? What horrible trends did I leave out? Let me know in the comments!