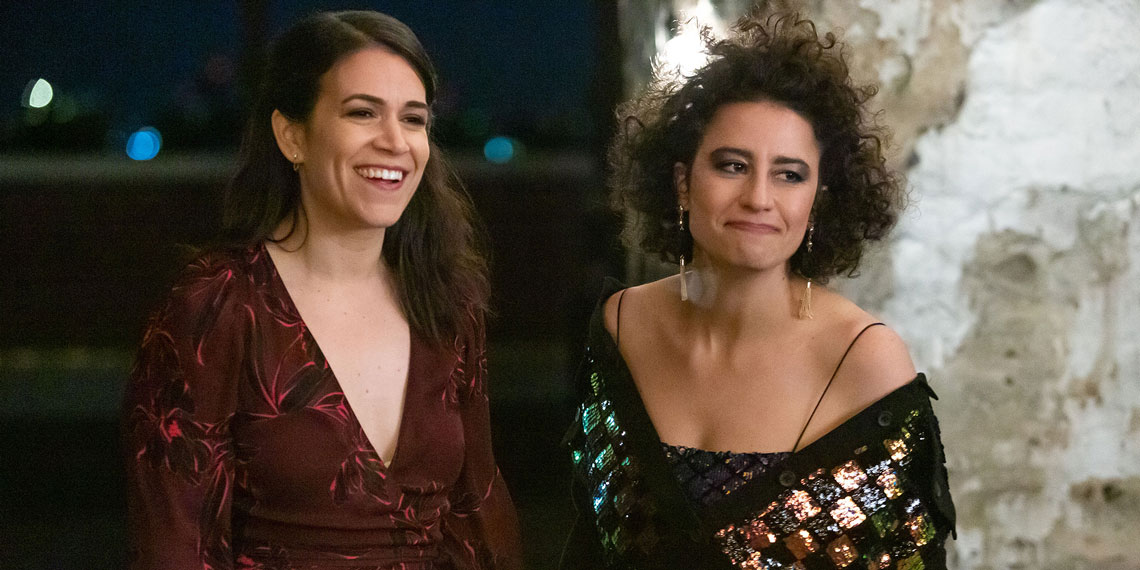 4 Ways ‘Broad City’ Made Me A Better Person

Well, fam, it’s time. The greatest show on earth is finally coming to a close. That’s right, Broad City is ending. I’m not crying, you’re crying! If you haven’t watched, just stop reading now because this article is going to be an epically long essay detailing every reason Broad City has truly changed me for the better, starting with the goddess co-creators and stars, Abbi Jacobson and Ilana Glazer. This amazing pair started pure television gold. I mean, just take a look at the people who have guest-starred on the show for proof: Fred Armisen, Rachel Dratch, Amy Sedaris, Seth Rogen, Kelly Ripa, RuPaul, Patricia Clarkson, Whoopi Goldberg and, lest we forget, Hillary f*cking Rodham Clinton. There have also been about a million other notable guest stars, but I didn’t want to give myself carpal tunnel trying to list all of them.

It’s the kind of show you can LOL at alone. Do you know how funny something has to be to make me laugh out loud with no one else in the room? V f*cking funny. Over the course of five seasons, I learned a lot about myself, New York, relationships, and more from this show, so if you haven’t watched and need a couple hundred reasons to start, read on.

Like most shows, Broad City takes place in New York, but not the New York we know and hate from Sexy and the City, Gossip Girl, Friends (which was actually filmed in L.A.), Girls, Seinfeld and every other white-washed sitcom and drama wreaking havoc on our televisions since the ’90s. The gals of Broad City live in Astoria, Queens and Gowanus, Brooklyn. If you don’t live in or near New York, neither of these places are in Manhattan, which is revolutionary for a show about New York.

Something else Broad City def got right are Abbi and Ilana’s apartments, which are neither inexplicably huge nor decked out in beautiful decor. If you don’t know what I mean, let me explain. Carrie Bradshaw of Sex and the City is a writer for a weekly newspaper. She writes a column about like, sex buddies and funky-tasting spunk (deep stuff!). Ok, so how, on a writer’s salary, is she living in a gigantic one bedroom in the West f*cking Village? I can’t even afford to get dinner there, and she’s living in a sea of Manolos in a rent-controlled apartment! I’m calling bullsh*t on this. Unless a Presidential motorcade hit her and the government is sending her monthly disability checks of $2 million, Carrie’s townhouse makes no sense at all. The way Abbi and Ilana live, with roommates and in reasonably-sized apartments, is a pretty accurate representation of what living in New York is like when you’re neither dead broke nor rolling in cash. Thanks for giving me a realistic preview of what living in this godforsaken city is actually like, Comedy Central!

In so many shows, the female character is always galavanting around the city on the hunt for a boyfriend, which like, same, but there are some women in New York (and elsewhere) who don’t really subscribe to the idea of monogamous relationships and just want to explore other options, like casual dating with no expectations. Throughout Broad City, Abbi and Ilana have wildly different dating experiences, but they have one thing in common: they represent female sexuality in a totally bold way, and for that, I love this f*cking show. Neither of the ladies apologize for her sexual or romantic inclinations, whether it be Abbi’s obsession with Jeremy (#pegged) or Ilana’s refusal to uproot her life for a man, even if he is the most perfect specimen to grace the Earth, Lincoln. I love the dating scene on this show because it’s nothing if not completely realistic and representative of dating in New York as a twenty-something. Almost everything that happens to them has happened to me: I’ve had a crush on a neighbor, I’ve been broken up with by my FWB because he met someone, I assumed a guy and I were dating after a week, etc. They tackle these situations in such an accurate and hilarious way that it makes me approach these epic f*ck-ups in my own life with a sense of humor.

I am a ride-or-die betch, so I have like, nine friends who I’d do some things for. Aside from all of the obvious things that define a friendship, Abbi and Ilana just really get each other, and refuse to let any disagreement or situation dictate otherwise. They will drop anything to help out the other and they support each other like it’s their job. It’s really a beautiful thing. Look, Gossip Girl is another favorite show of mine, but like, come ON with the pettiness and backstabbing, y’all! As women, we need to support each other in this f*cked-up Trumpville we call America. We need to make each other laugh and remind each other that we is kind, we is smart, and we is important because who else will? Mitch f*cking McConnell? I think not! Honestly, my favorite thing about this friendship is the way Ilana feels about Abbi’s butt, which is perfect and Ilana makes sure Abbi knows it, because what else do we have if not body positivity? If you can’t accept your body and face on your own, find a friend who will make you see yourself for the hot motherf*cking queen you are. We can’t all live like the Kardashians, who treat the traits they were born with like jumping-off points for plastic surgeons, so find a friend who will give you some body-positive confidence like Ilana does for Abbi.

These girls know who the f*ck they are, and I’m about it. Their characters evolve, of course, but they remain true to their nature throughout the course of the show, and that’s important to note. As a twenty-something in New York (how many times have I said that now?), I feel so much pressure to keep up with all of the cool new fashion lewks, workout spots, trendy restaurants, exclusive clubs, etc., but Abbi and Ilana don’t let that sh*t affect them. They just do what they want, like walk from the top to the bottom of Manhattan for Abbi’s 30th birthday. Watching that episode made me realize that I don’t really need to be doing all of these “cool” things (like spending $75 at dinner) because I feel like that’s what I should be doing, even though I’d rather order Domino’s while watching The Act with my roommate. The bottom line is that these women are proud to be who they are and want everyone else to follow in their footsteps, but in like, their own unique way, of course.

To conclude, Broad City is the funniest show ever and everyone needs to watch it. If you’ve seen it and ~it just isn’t your humor,~ please delete my number because we can’t be friends anymore. I hope Abbi and Ilana, who are real life BFFs, will make another show or podcast or SOMETHING together because the world is not ready to say goodbye to the most iconic duo of all time.