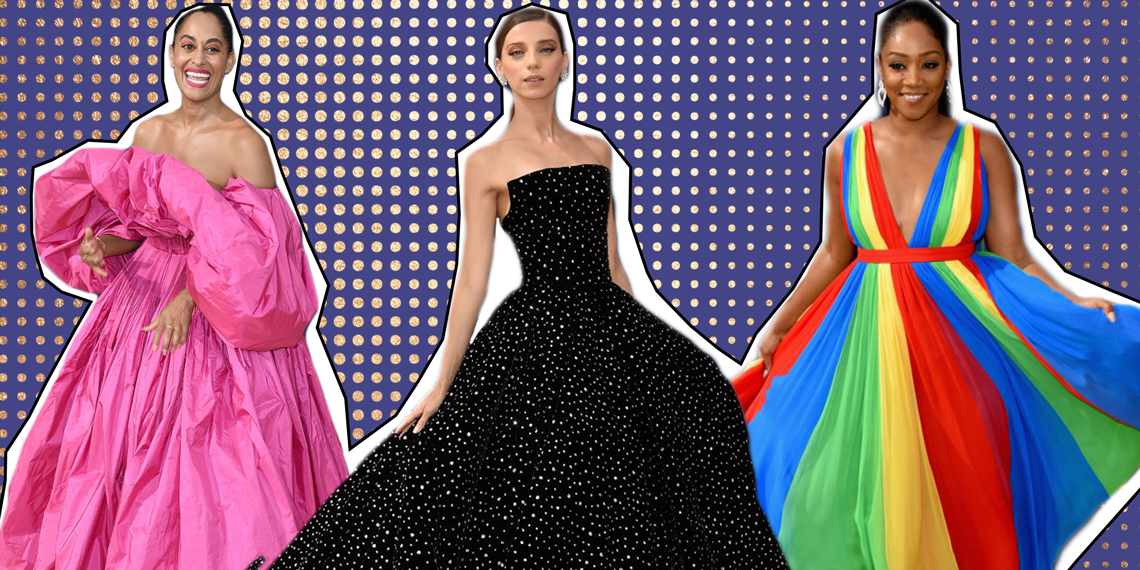 The Best And Worst Dressed Celebrities At The 2018 Emmys

It always hurts my brain to watch an awards show and see celebrities dressed like sh*t. I’m sorry, but I don’t understand how with access to the top designers in the world, you still look like garbage. And of course, last night’s 70th annual Emmy Awards was no exception. I get that fashion is subjective, but no one, I repeat NO ONE, can honestly tell me they liked Alexis Bledel’s butterfly dress from last night. Going to go ahead and kick off the worst dressed list with that one, giving that dress a hard thumbs down. Fortunately for my bleeding eyes and puzzled brain, there were a significant amount of other celebs who actually killed it on the red carpet. The biggest trends we saw last night were: white strapless dresses, ‘80s vibes, and bright neons. Now, I know this article is supposed to be about fashion, but I do need to address the elephant in the room—the atrocious ‘80s style makeup every star was wearing. The whole “matching your eye shadow to your dress” was a signature middle school dance look that I had hoped to never have to see again. Look, it was cool af when I wore aqua blue eyeliner that matched my Macy’s dress to my 8th grade semi, but it def wasn’t cute last night when all these grown women tried to do it. Anyway, now that I got that off my chest, let’s get into what you really came here for —the 2018 Emmys fashion.

Jessica Biel looked like a 7th heaven snaaackkkk last night in a stunning white strapless dress complete with hottie JT on her arm. Her textured white dress was breathtaking, and her effortless curls, fuschia lip, and perfect tan were legit everything I never knew I needed. Claps for you, Jessica.

This dress was so beautiful and entrancing, it reminded me of staring at the stars on one of those classic grade school field trips to the planetarium. This dress was the Kira Kira app come to life. It was mesmerizing and made me feel an unexplainable sense of calm and relaxation, like when I watch those Instagram videos of people cutting cake perfectly. From the makeup to the hair to her jaw dropping dress, Angela Sarafyan stunned on the red carpet last night. I mean, I’m still a bit confused as to how the hell she got that huge dress into a seat, but I guess that’s her own problem.

The powder blue color of Issa Rae’s dress/jumpsuit situation is easily my fav color in the world. BUT, the color of the outfit alone wasn’t enough for me to put Issa Rae on the best dressed list (looking at you, Michelle Dockerey). The jumpsuit/gown hybrid looked legit perfect on Issa and was an ideal Emmys outfit. However, I will say, I was not down for the Claire’s earrings. But hey, ya can’t win them all (even if Insecure should have won all the Emmys).

I think I’ve legit moved Tiffany Haddish back and forth from “best” to “worst” dressed five times now. Ultimately, I’m going “best” because, for once, the comedy star got the hair and jewelry totally right. And, low-key, I was feeling the dress. Sure, she looked like a Skittle’s commerical, the rainbow road in Mario Kart, and even like that big rainbow parachute we all played with in grade school gym class…but she somehow still looked good. Although I’m still confused as to why she wore her best Charlotte Russe platforms to the Emmys, at the end of the day, when I couldn’t see the shoes, I was down for the look. Plus, the dress has some special meaning with her father or something, so I guess she gets some bonus points for that.

I already gave you a taste of my dislike of Alexis Bledel’s Emmys dress, but let me just start by saying homegirl looked like Ginny Weasley at the Yule Ball. Secondly, I don’t know what the obsession is in Hollywood with butterflies, but it’s childish. It actually looks like she has those fluttering butterfly hair clips that were popular in grade school taped to her dress. Plus, the yellow tulle is unnecessary and weird—this dress is something I might have worn to my bat mitzvah, or like I said, a Christmas ball for preteen wizards, but not to the Emmys as a full-grown adult. I feel like whoever designed this initially intended the girl who plays 13-year-old Kate on This Is Us to wear it.

I literally love Michelle Wolf, but holy sh*t. This is… wow. This dress looks like something you would have bought on the clearance rack at the now-defunct store Deb. Niche joke, perhaps, but I’m not wrong. And what’s with the two weird devil horn hook things? I just want to know who did my girl Michelle dirty like this by putting her in this dress.

I hope I’m the first to say it: Samantha Bee looks like Jafar. Like, truly, how could such a smart women have chosen to show up in such a horrible outfit? What’s with the weird gold trip that only goes halfway around her collar and then stops inexplicably on her waist? And the belt?? Iago really should have told her that it was a bad move to match the step-and-repeat.

As soon as I saw Tina Fey last night I immediately had flashbacks to Jennifer Garner in 13 Going on 30 doing the Michael Jackson “Thriller.” And, as much as I loved that scene in the movie, I certainly did not love Tina’s recreation of the look. The belt on the dress was highly unnecessary, and the hair made her look legit insane. Also whatever that embellishment is along her neckline is very Hot Topic. To harp on the hairstyle one more time, Tina is wearing the exact same bun as I am right now, except that I’m hungover at work in athleisure because my friends convinced me to drink on a Monday night.

Another woman I love that I am forced to roast because of bad fashion choices. Connie, girl, I know you played an amazing mom in Friday Night Lights, but that doesn’t mean you have to show up looking like a mom at the Emmys. This just not an Emmy’s dress. Shorten it a bit and pop a glass of rosé in her hand and it’s a great single-moms-have-a-Hamptons-weekend dress, but for Hollywood’s biggest night, it’s a no. Also, to borrow a phrase from Katy Perry, that dress needed another fitting.

Uhm, yikesss. I’d like to start by mentioning that my dad was actually watching the pre-show with me and, although he’s no Marc Jacobs, even he said this look was awful. This dress looks like something she had just blindly picked up from the clearance rack at Wet Seal. It was a strange cross between an altar boy costume and a Miami housewife’s summer look.

Final thoughts, shoutout to my girl Miss Ungermeyer for taking home an Emmy last night! You were clearly robbed of an Oscar for your captivating role in The Lizzie McGuire Movie, so I’m glad you at least scored yourself an Emmy, you sneaky brown-noser, you! Additional shout-out to the girl who got f*cking engaged on stage at the Emmys last night. You know that lady is PUMPED to tell that story at brunch tomorrow. No matter how many texts back any other girl at the table got, we all know the girl who got engaged on stage clearly wins brunch. Good for you, sis.