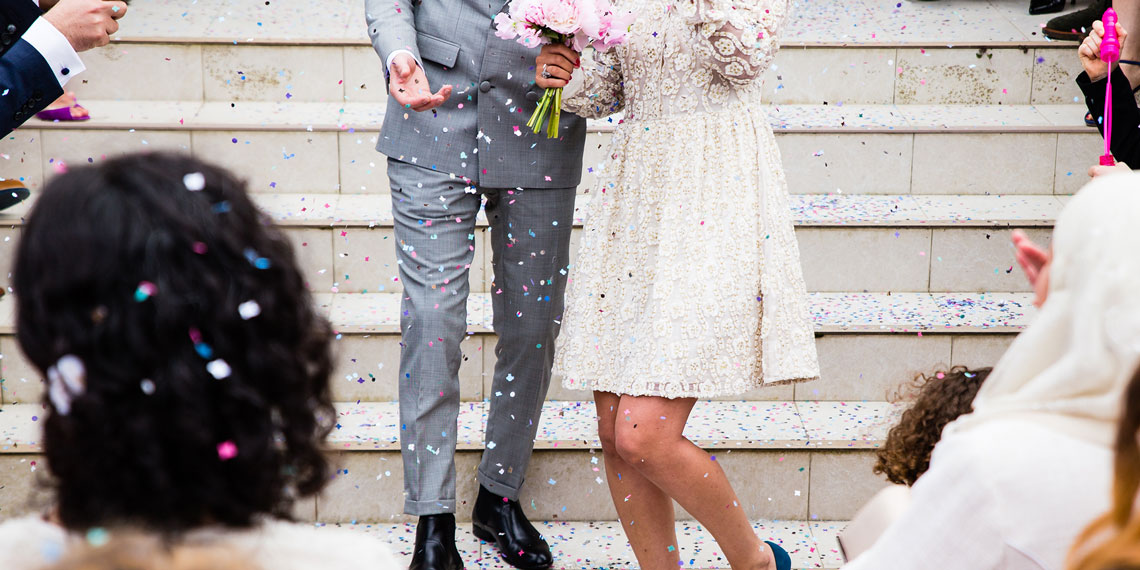 10 Things Nobody Tells You About Wedding Planning

You get engaged, and it’s all sunshine and Instagram likes for a few weeks. Then the terror will set in when you realize you’ve just become a one-woman party-planning committee for what will amount to a sh*t show in a nice venue with fancy clothes. Unless you’re planning on hiring someone to do the dirty work and heavy lifting for you, the majority of wedding planning—from dress to shoes to flowers to photographers to food—will be on you, sweetie. While, yes, parts of it can be totally super fun, there are a lot of dark things that’ll come out during this time. Here are a few things nobody tells you about wedding planning.

1. The Groom Really Won’t Care And, If He Does, You’ll Be Annoyed

At first, he’ll be all, “Baby, I wanna be an involved groom.” That’ll die off after about three months. Especially once you start asking him what he wants the boutonnieres to look like or what color napkins you should have for cocktail hour. You may also start pulling decision-making away from him after you ask him to choose groomsmen gifts and he decides he wants to buy the tuxes for each of his eight dudes and maybe throw some knives in for good measure. Or when you tell him to pick things out for the registry and you see he chose four different shovels, a drum set, and a lawnmower.

2. You Will Stop Caring, Then Start Re-Caring

You’ll probably hit this point during the font-picking process for your invitations. Or maybe during the centerpiece discussion. It doesn’t matter. You’ll have a moment where you’re all, “OH MY GOD IT’S JUST A BIG PARTY—WHO F*CKING CARES” and you’ll stop planning until you get 18 emails about flowers and payments then you have to jump back in.

3. Planning Blows Regardless Of Wedding Size

Whether you’re gearing up for a hipster Mecca at the local IPA factory or a Princess Diana themed affair in a cathedral, you’re still planning it. There will still be seating arrangements to configure, flowers to choose, timelines to create, and arguments over shoes. So don’t think that just because you’re planning a small garden party afternoon affair that you’ll have less to do than the b*tch that wants a 500-person shindig at the local country club. The suckiness of wedding planning does not discriminate, and is equally sh*tty for everyone. I guess that’s comforting?

You may tear up over napkin colors. It may be when you realize you can’t afford the $30k flower bridge option. It could be when Daddy puts the kibosh on a 6-hour open bar, which, rude. Doesn’t matter—prepare to cry. A lot. Sometimes over nothing.

5. Everyone Will Have An Opinion

I think I was two months into planning when two close family members ganged up on me about how I was wearing my hair and makeup. “Why would you pay for makeup? My girls didn’t and it was fine. It won’t look like you.” “Don’t wear your hair down—it’ll be tacky and weird.” “You don’t need a veil.” “You’re spending too much money on an up-do.” “Buffets are gross.” “Can we have top-shelf vodka?” “I’m not coming if it’s not an open bar.” “Why didn’t you put dishes on your registry?” “I don’t want to wear that color dress.” You’ll have a meltdown and will likely give in to at least some of the critiques. Or you’ll cry-scream at your mom and get drunk alone while sobbing through Pinterest pages because no one understands your vision. Speaking hypothetically of course…

6. You Can’t Escape, Even In Your Dreams

Prepare to wake up in a cold sweat after dreaming that either no one came to your wedding or all the flowers were carnations or that your bridesmaids wore the wrong shoes (after you explicitly told them where to buy the ones you wanted them to wear) or that your photographer forgot to take pictures. I speak from experience. This sh*t will consume you.

Unless mommy and daddy are footing the entire wedding bill, chances are you’ll be paying for sh*t right up until the “I do’s.” Even if your parents are paying for the venue and wedding itself, you’ll probably end up buying bridesmaid gifts, last-minute umbrellas (don’t get me started), shoes, honeymoon outfits, favors, etc. After the wedding, though, you’ll be like, “OMG, where’d all this cash come from?” so that’s something.

8. Music Is A Nightmare

First, you’ll go back and forth over band vs. DJ (really, whether you want a wedding singer trying to hit the big times when their rendition of “FAME” or a cheese d*ck DJ from Long Island called DJ Spinzz whose go-to line is “ALRIGHT PARTY PEOPLE”). Once that’s settled, prepare for the discussions about the ceremony music and cocktail hour music. Will there be violins during the actual nuptials? How about a booming pipe organ because there’s no other f*cking option in the cathedral? Oh, then prepare for your parents to try and “help” by creating the playlist for cocktail hour because, like “well you’re not even going to be here for it” and then having to gently explain to them that two hours of show tunes and Bruce Springsteen are not the atmosphere you’re going for.

…and you won’t care. Honestly, on your wedding day, your limo driver may make a wrong turn after you told him EXACTLY where you wanted pictures done. Your florist may show up way too early with flowers. Your bridesmaid’s dress may rip right down the back during pictures. Someone could throw up on the floor at your venue. All these things happened at my wedding, and I didn’t care. You’ll be so caught up in the whirlwind of the day that little sh*t won’t matter.

10. You Won’t Know How To Spend Your Time Afterwards

Once the day has passed and the planning is over, you literally won’t know what to do with all your free time. You may even feel kind of sad that you don’t have dresses and flowers and open bars taking up all your time anymore. We suggest yoga and day drinking.