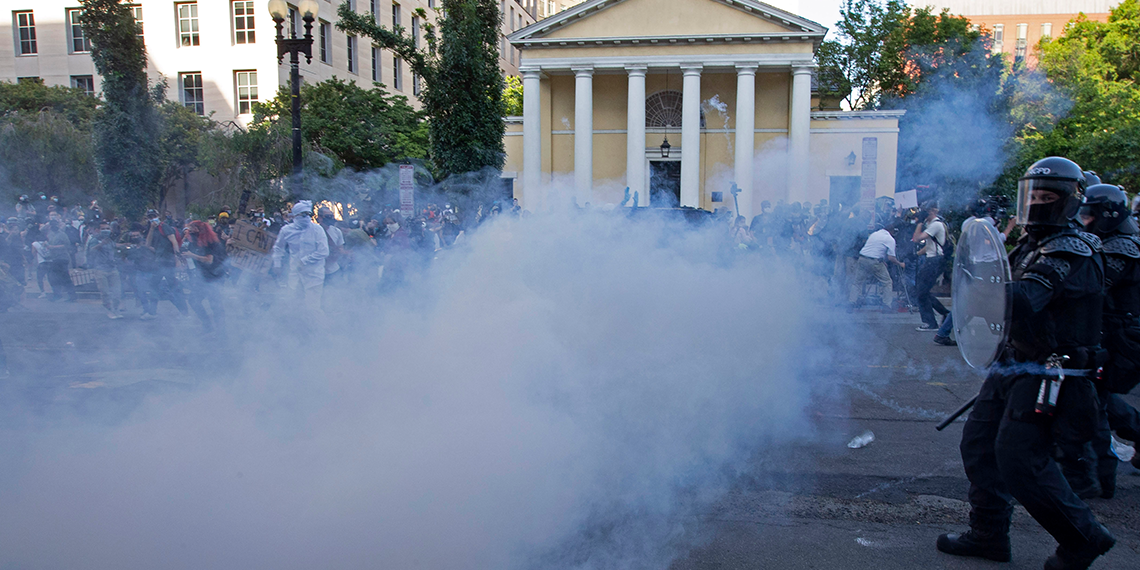 If you’re paying even a tiny bit of attention to the world around you, you’re probably aware of the protests spanning the nation over the past two weeks. These protests were sparked by public outrage over the graphic murder of George Floyd. However, they take place with the backdrop of a global pandemic that has disproportionately killed Black people, who are often quite literally sickened by America’s systemic racism. The protests also follow the murder of Ahmaud Arbery in Georgia and the fatal police shooting of Breonna Taylor in Kentucky. Both instances only came to national attention months after they’d taken place, with no evidence perpetrators would have faced consequences otherwise. Indeed, Breonna Taylor’s killers are still free.

From all walks of life. From every race, gender and nationality: the people of this city are what truly makes it such a beautiful place. And in solidarity, we continue to peacefully protest in the tens of thousands in support of #blacklivesmatter. ⁣ ⁣ ⁣ ⁣ ⁣ Photo by @lauraskills

A second weekend of protests remained largely peaceful with seemingly fewer violent clashes with police and incredible scenes of peace and solidarity around the country.  But throughout the first week of June, militarized police forces and curfews that criminalized simply being outside resulted in thousands of arrests and countless accounts of police misconduct during what were initially peaceful demonstrations.

These scenes unequivocally show how police have continued to act violently and dangerously, even at peaceful protests… peaceful protests against police brutality and violence, no less. This is by no means a definitive list, but it should be a wake-up call that we are far from where we need to be as far as justice, progress, and equality are concerned.

A News Crew Flagged The Police To Stop Looters. They Handcuffed Black Community Members Instead.

This is one of the most absolutely insane moments I've ever seen on live television. pic.twitter.com/Uvzig8YGSa

In this video filmed in Los Angeles, some people are attempting to loot a number of local businesses, leading to a reporter attempting to flag down law enforcement to protect the store and stop the looting. Instead of arriving calmly to the scene and taking literally 30 seconds to listen to those involved and actually, IDK, do their jobs, the police seem to go straight for the Black community members who were trying to protect their community from looting and damage. The officers largely ignore the reporter who is trying to explain that the individuals being put in handcuffs did not instigate the situation. As drivers in the area become concerned for the protesters, several exit their vehicles. They also appear to be held by police.

While this video looks like a scene out of a movie about the end of the world, it was actually taken in Philadelphia and couldn’t be further from fiction. After a march was broken up by police officers spraying tear gas, protestors were forced to move up towards a highway. 17 seconds in, you can hear the unmistakable phrase we have become all too familiar with: “I can’t breathe.”

BREAKING. Some protesters have jumped the gated barrier at Lafayette Park. US Park Police push them back. The White House is behind the US Park Police l & the Secret Service. @MSNBC @nbcwashington #GeorgeFloyd pic.twitter.com/RzJgnvv7Vq

Here, park police in DC rush a Black protester who is kneeling with his arms up. Another person who is clearly aware of their privilege joins him, trying to act as a barrier between him and the police. Despite his overwhelmingly non-aggressive actions, a group of officers rush them, forcibly pushing them back and forcing the protester to stand up. The young man’s name is Monte, and when questions were raised about the circumstances of the encounter, he shared additional footage showing an officer threatening to “hurt” him.

In this shocking scene, an older man can be seen approaching police, but clearly poses no threat. An officer shoves him violently, causing him to lurch backwards several feet before falling to the ground with great force directly on his head. The 75-year-old man, later identified as Martin Gugino, instantly bleeds from the head. The officers ignore him as bystanders plead to get him medical attention. Gugino was hospitalized with a head injury. Both officers involved have been charged with assault. They have plead not guilty.

Man Opens Door To Protesters To Protect Them From The Police

@ABC7Kristen asked Rahul Dubey "what made you open your door and say 'get inside?'"
He describes the chaos, tear gas and pepper spray. pic.twitter.com/2t3MHaFDzu

Heavy law enforcement presence throughout American cities didn’t just intimidate protesters. Residents in communities where protesters were cornered and threatened were so concerned for their safety that they sheltered them in their homes. A man in DC opened his doors to close to 100 protestors who were blocked in the area by police spraying tear gas and pepper spray. The man in the video explained that there was a “human tsunami” and recounted seeing police wands and batons out.

As I’m sure most of us are aware, the President of the United States will do quite literally anything for a photo op. Last week, tear gas and flash grenades were released on protestors to clear a path so that Trump could have a 17-minute photoshoot on his walk to the church. Trump has not even attempted to appear like he gives a sh*t about the Black Lives Matter movement, George Floyd, or the systemic racism in our country. The result: a picture of him holding the bible the same way someone would carry a bag of dog sh*t.

The building, the St. John’s Episcopal Church, had been damaged in unrest nights earlier. Rev. Mariann Budde, bishop of the Episcopal Diocese of Washington, said she was not notified of the photo op and denounced the president for using the church as a prop.

NYPD Arrest New Yorkers Sitting On Their Stoop After Curfew

In this scene shared to Twitter by singer/songwriter Shaina Taub, she and her boyfriend are arrested while supporting peaceful protesters from their stoop. As law enforcement takes a man away, bystanders state with alarm that he lives in the building (cops have often attempted to storm city buildings where residents have sheltered protesters. see above.) Taub notes she was arrested with an essential worker grabbed from his bike and detained before he could show officers a note from his employer allowing him to earn a living this week.

last night my husband and I got arrested on the stoop of our building on the UWS just after 8 pm. we were cheering on a peaceful protest on our block. this was my small visceral window into the police brutality black folks have experienced for centuries. #DefundThePolice pic.twitter.com/SIbMxgekwi

Multiple times this week, law enforcement has implemented a “kettling” strategy, which means they literally wrangle protests like cattle into tight spaces to contain them. Not only does this force large groups into small spaces (during a pandemic, no less), but it also leaves protesters vulnerable to stampede, medical emergencies, dehydration, and more. Kettling also allows officers to make mass arrests, forcing hundreds if not thousands of peaceful protesters into an already crowded jail system during a global pandemic.

There are now two all white armed vigilante groups roaming Fishtown with the blessing of the @phillypolice pic.twitter.com/csGWCDZ6Nw

This horrific footage shows an all-white vigilante group roaming Philly’s streets with baseball bats and other weapons. They only got more aggressive when the group was met by a peaceful counter-protest of individuals, many of whom were holding signs that read, “I can’t breathe.” When the police were called to disperse the incident, they immediately moved towards the peaceful counter-protest instead of apprehending the white guys holding literal weapons. One reporter was attacked by the white group for filming the incident and posted the gruesome images on his Twitter.

This is one of the most egregious ones of these I’ve seen, and that’s saying a lot https://t.co/pQgRsc0bzF

This disturbing video was taken in Kansas City when cops rushed a Black man who was literally peacefully exercising his First Amendment rights. The officers spray him and a woman standing next to him with mace before three police officers grabbed the man and tackled him. Following this, officers began spraying the entire crowd with mace.

Journalists nationally have been targeted by police for doing their jobs and reporting from massive protests. Many of us have seen the clip of Omar Jimenez, a Black man and a CNN reporter. Jimenez was arrested with his crew during the Minneapolis protest. In this video, cops were shooting rubber bullets at Kaitlin Rust, a reporter for NBC’s Louisville affiliate station.

Young Man Begs For Unity And Calls Police His Family. They Arrest Him.

@pharaohalmighty This world breaks my heart everyday of how much hatred we have for one another on both sides of the field. “I Cry At Night Because I Feel Everyone’s Pain” Sometimes it feels like a movie to me and I just want people to understand each other, respect each other, and care for each other; because then and only then can we truly connect as one nation and move forward together to provide a better world for ourselves and for generations to come. We Can Do Make More Progress Together Than We Could Ever Do Alone ✊🏽💯🖤🙏🏼 #blacklivesmatter #alllivesmatter #mylifematters #peacefulprotest #martinlutherking

Protesting in Charleston this week,  Givionne Jordan Jr., emotionally exercised his First Amendment rights. He literally said the words “I am not your enemy” and seems to have expressed no intention to incite any violence. Nonetheless, two minutes into the video Jordan was grabbed, arrested, and held overnight. Many on social media remarked they thought the office was approaching to grab Jordan’s hand, not detain him.

A Night Of Mourning For George Floyd In Minneapolis

There also were moving images of healing and solidarity across the country reminding us of who we could be. Minneapolis residents defied the city’s curfew this week to hold an all-night vigil for George Floyd.

The motto “to protect and serve” seems to no longer hold any weight among police forces. While there are cops who don’t actively target BIPOC and aren’t outwardly racist, as we see in this video, there are far too many who sit idly by while their coworkers continue to prove that no progress has been made in the fights against racial injustice and police brutality. From where I stand, those sitting idly by are complicit in the violence and guilty of violating their sacred oath to “protect and serve.”

As a white woman, I have an extremely limited ability to fully grasp these situations. My voice also has very little importance here. What these videos and images and situations like the ones depicted teach me is that it is not enough to post about racial injustice. It’s not enough to simply be against racism, we have to be better allies and we have to work at active, conscious anti-racism.

Donate to groups like Campaign Zero to fight to end police brutality.

To stay up to date on the protests, subscribe to the Sup newsletter.