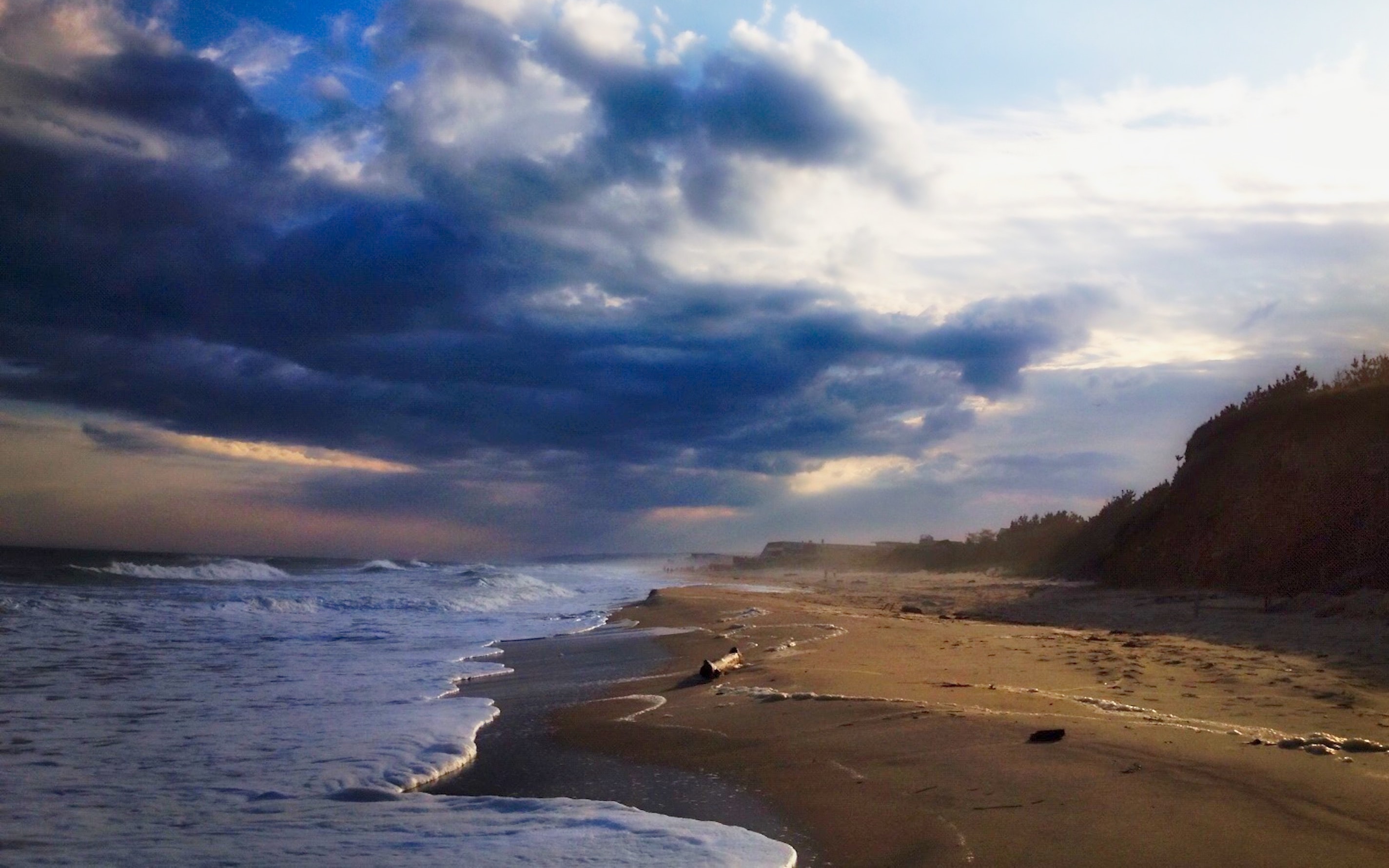 It’s time to face the music and finally admit it: Montauk f*cking sucks. It’s a seemingly ironic yet blatant fact that you and your friends can’t seem to come clean about, so I’ll do everyone a favor and admit it for you. Gone are the days of a quaint beach town where you shack up with your besties and make your own fun, while of course peppering in a few nights at the happening spots in town. (Keyword here: few.)

Before Instagram blew up your newsfeed with all the “see and be seen” spots, navigating Montauk ran on an “if you know, you know” mentality. A drive through the small main strip of town will only reveal a handful of all that Montauk’s heyday had to offer. Before Montauk (in basic bitch term) “blew up”, it was only by word of mouth that you knew about Navy Beach (and where the hell it was). You knew that while The Lobster Roll looked like a roadside dive, it was the best stop for lunch before heading into town. The Harvest was all the rage and absolutely nothing topped a post-beach happy hour at The Sloppy Tuna. After a day of charter fishing, the boys in your share house knew to take their fresh catch to get prepared and served at Wok & Roll. I’d tell you to still keep that one a secret, but they recently closed (because of course they did). You could do it all, and the best part was that you could do it without having to get decked out in your best city attire. Back then it was golden hour, every hour: chill vibes, chill dress code, great times. Sounds amazing, right? Well, it WAS amazing, until it all came to a screeching halt.

It might surprise you to learn that Montauk used to be an extremely quiet, isolated fisherman’s town. As local beach towns became popular weekend getaways, crowds flocked to the luxurious allure of The Hamptons. The houses were lavish and all the latest hotspots (RIP Pink Elephant) were full of beautiful people with beautiful Chanel bags on their arms. To solidify The Hamptons’ status, exorbitant amounts of celebrities began to buy summer megahomes there. Glitz and glam took The Hamptons by storm, and all the while, Montauk remained virtually the same: a humble, family-friendly beach town.

Today, the scene has totally changed, and sadly, it’s been for the worse. We’ve officially entered “book your summer house” season, and I’m here to inform you that, unfortunately, Montauk is so six summers ago. As someone who’s spent every summer of my life going to Montauk, I’ll preface this detailed list of reasons for its demise with a brief foreward: similar to an ex, MTK will always hold a special place in my heart, but things have reached the point where it’s officially time to break up (cuz I’m bored).

I get that good things come to those who wait, but is the 3+ hour drive to Montauk worth it? Absolutely not. I drove there this past summer over 4th of July weekend and it took us 4 ½ hours to get there. It’s gotten to the point where you think you’re being smooth by taking the back roads, and even the back roads are filled with traffic. It’s utter first-world misery, and if you’re a Montauk veteran like myself, then you’re also O-V-E-R I-T.

And don’t even get me started on the 3 hour+ train from Manhattan filled with rowdy amateurs, snapping pics with their BFFs to show the world they’ve begun their miserable voyage to beachside hell. Everyone has their bulky luggage in tow (New Yorkers are very extra when they travel). It’s loud, it’s long, and if you think you’re actually scoring a seat on this train, that’s really cute of you.

This one really kills me. Simply put, here are your four options for your stay in Montauk:

Haven’t we been in the workforce long enough to realize these options are a total waste of our hard-earned money? For the love of God, take that money and go to Europe.

You know it’s officially time to stop going somewhere when there are TV shows about it. Which, by the way, The Lobster Roll seriously needs to get over its five minutes of fame from The Affair. (Seriously though, f*ck that show and all its sus sexual misconduct amirite?!)

Anyway, the scene is totally out of control. High heels and beach towns should only be a legal combination at the Jersey Shore.  I’m all for a glam night out, but it’s become next level bougie up in this bitch. Hard pass.

This past summer, I realized in my 3am drunken stupor that everyone in line at Pizza Village were very much out-of-towners and not New York natives. I couldn’t contain myself and just had to ask the people in front of me why they were all the way out in Montauk (my gripes towards Montauk have clearly been festering for quite some time). Ready for their response? “Because we saw it was the new hot spot on that TV show!” Kill me. But also, don’t judge me for going to Pizza Village, you know we’ve all been there… literally.

4. The Growing Presence of City Brands

Remember how earlier I said:

“A drive through the small main strip of town will only reveal a handful of all that Montauk’s heyday had to offer.”

Well that’s still true today, except all the other places Montauk has to offer now are exactly the same businesses we frequent on a daily basis in Manhattan. Seriously Montauk, why the hell did we need a Tacombi, Bluestone Lane, Scarpetta, Van Leeuwen, etc. in the middle of this beach town? An even bigger question: who the f*ck thought a Common Ground pop-up was necessary here? The Meatpacking location is a nightmare in and of itself, but leave it to Montauk to encourage yet another location of these types of places. And the SoulCycle! …I’m totally kidding, we absolutely needed one of those here.

But in all seriousness, what’s the point of leaving town when you’re surrounded by all the same brands you have at home? Isn’t the point of a beach getaway to escape your everyday routine and indulge in a change of pace?

As Al Gore boldly phrases it, global warming is an inconvenient truth. Nothing pulls at my heartstrings more than the devastating effects of climate change. (Seriously, do your part and go green— our time is running out!)

Montauk’s beaches are just one of the countless casualties of climate change. There’s such a small amount of the shoreline left that I nearly tear up every time I step foot there. It’s almost as if Mother Nature herself is over the Montauk hype and is doing whatever she can to literally push the degenerates out. The size of the beach is utterly incomparable to my childhood memories, and you’ve probably been too drunk summer after summer to even realize it. Get woke gals.

6. Amateur Hour at Every Turn

Popping bottles of champagne raging on the beach? Save it for the frat house.

Being forced to eat Ruschmeyer’s abysmal food just to avoid the 2 hour line? For shame!

Bottle service at Memory Motel? LOL. (No seriously I’m really laughing as I write this, that’s how comical the sheer idea is.)

I seriously feel like Daria watching Sick, Sad World when I see this BS go down. Do you people realize Montauk residences have held several town hall meetings about how they want to abolish the horrible crowds that their beloved town now attracts? We’re better than this lunacy and can absolutely take our talents elsewhere.

It’s nonsense like this that has not only made patronizing these places miserable, but has also contributed to the immense lack of integrity a present-day Montauk business has. Why would they even try to have good food or drinks when they know the crowds will come regardless? Which brings me to my next point…

Whether you opt for a grab-and-go cafe or a three-course fancy dinner, it’s impossible to eat here without breaking the bank. And look, I’m always more than happy to drop bills on food as long as it’s actually good, but the food scene is seriously hurting here for the price. @ NavyBeach: GTFO of here with your $20 price tag for six pieces of fried calamari. Don’t mess with a girl who’s been drinking all day and her ravenous appetite, because that’s some serious soul-crushing stuff.

We all loathe an Uber surge, but in Montauk they’re next level. This past summer, my friends and I paid $140 for a whopping 7-minute Uber from Common Ground to our hotel. I wish I was kidding… about both the surge and the fact that I actually did go to Common Ground this summer.

9. Way Too Many People Finessing Their ‘Gram Status

I’m all for doing it for the ‘gram, but for god’s sake, be cool about it. If you’re gonna take a pic with your crew on the Ronjo tiki head, make it snappy and then get to happy hour already. Do not stay on your phone posting videos of where you are all night. Do not go somewhere just for the location tag. Do not go to The Lobster Roll to take pics of where Noah f*cking met Allison. Do not pass MTK Highway, do not collect $200.

10. Last But Not Least, How Much It’s Strayed From What It Once Was

A wise philosopher (I think his name is Drake?) once said: “Nothing was the same.” And in all seriousness, it’s truly sad how much this amazing beach town has changed. Fond childhood memories of shopping at stores like A Little Bit of Everything and relaxed nights out are all donezo, because they literally don’t exist anymore. Beach bonfires are plagued by drunks and the only chill bar left in the entire town is The Gig Shack. A few summers ago, a genius company was selling “Make Montauk Less Great Again” hats outside of The Point. Politics aside, the satire was SO spot on because Montauk really was at its pinnacle before it underwent this revamping no one asked for. The hat had a steep price tag of $50, but to this day I’m happy I made the investment, and you best believe I wear that hat very proudly. Part of Montauk will always feel like home, but ultimately I’m f*cking over it. And you know you are too.

Joana is a Freelance Travel Writer at Betches. She's traveled the world near and far and definitely doesn't do it for the 'gram... because she's quite possibly the only millennial that doesn't have one. Traveling to her is all about #culture (and, of course, finding the best hot spots).