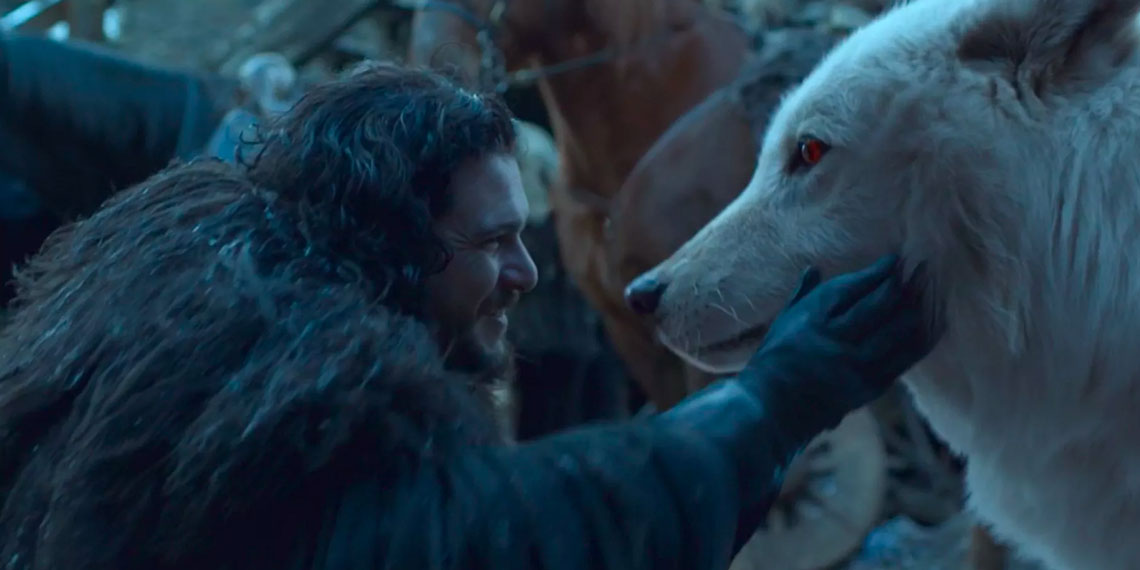 10 Questions We Still Have After The ‘Game Of Thrones’ Finale

I think we can all wholeheartedly agree that this season of Game of Thrones was the most rushed, poorly written ending to a series since Lost. It inspired rage that hearkened back to the “Don’t Stop Believin'” ending for Tony and The Sopranos. At least while George “I can’t finish a book” RR Martin was providing source material, DB and David could keep our characters and story lines on an acceptable, timely track. This season, we had a woman make a split-second decision to kill literally everyone, Jon Snow suddenly know how to ride a dragon, Varys suddenly forget how to be the sneaky bitch he was for 10 years (RIP tho), and Jamie go all the way through his character arc just to do a total 180 and end up right where he was before—banging his sister.

A few good things to come of this season include Ghost surviving, Sansa becoming the true boss bitch she is (and staying independent in her fashionable winter wardrobe), and Robin Arryn getting REALLY HOT since we last saw him. Even though the series is over, we have a LOT of questions that demand answers regarding this entire season and series, into which I have poured countless hours crying, reading Reddit theories, and arguing about predictability via Instagram. Shall we?

What Happens When Drogon Comes Back?

I have a LOT of questions pertaining to Drogon, who I incorrectly predicted would die by the end of this season. As a note, I think I felt more feelings for this dragon than any human-related plot or interaction in the last six episodes, which is saying something, and that something ain’t great. Who else had major Lion King flashbacks when Drogon gently nudged a v dead Dany to get up cause “we gotta go home, mom”? I thought I’d gotten past that as an adult, but apparently not. More importantly, once Drogon picked up his mommy and flew off, where’d he go? What happens when he comes back? Is he going to destroy a different city in the meantime? Do dragons have a grasp on death? Can they feel feelings? Additionally, why did Drogon burn the throne and not the dude who clearly JUST STABBED HIS MOM? Does he have something against swords? Thrones? Sword thrones? Maybe DB and David read him the script ahead of time? I demand a dedicated series to Drogon and his fun-filled exploits around the world.

Or does she found the flat earth movement? That honestly seems like something she’d do. I can’t even truly express how much I don’t give a sh*t about Arya’s exploits. But I do have a few questions about her entire character arc that led up to her conquistador moment. What’s going to happen to all the faces in her bag? Is she going to entertain the crew with a one-woman puppet show? F*ck if I know (or care). Additionally, where’d she get that boat? What happens when there is no land West of Westeros? Where’d she find a crew willing to sail under someone with little to no exploratory experience? Is she going to eventually go back to Winterfell to piss Sansa off? Stay tuned, I guess.

Will Jon Snow Ever Be Happy?

This poor f*cking guy has been stabbed, had to watch two girlfriends die, never had a mommy, and definitely has some deep-seated psychological issues after what he’s been through. He has a handful of friends who tend to die, and when he finally has a cause to rally behind, said cause ends up being a genocidal maniac who dabbles in incest. So, what? Now he’s going to f*ck off up north with a bunch of questionably-fashioned homeless folks, a heartbroken ginger, and his CGI good boi for the rest of forever? Justice for Jon Snow. Also, why is there even a Night’s Watch? I’m pretty sure we killed all the dead things in episode 3, made peace with the Wildlings several episodes (seasons?) ago, and have no threat looming north of the wall except for hypothermia.

When Did Dany Lose Her Sh*t?

This has been a question floating around since episode 5 when Dany decided to unleash Drogon’s fire breath on the entirety of King’s Landing. What, exactly, set Dany off course from white savior of Essos and Breaker of Chains to blathering psycho intent on burning cities, banging nephews, and becoming a more attractive medieval Hitler? I have a hard time believing that Jon refusing to make out with her was the straw that broke the Khaleesi’s back. Missandei dying, Rhaegal dying, and her nephew refusing to snuggle—all combined—make for a pretty sh*tty week, but, again, it seems like a stretch that a few sad events caused Dany to have a true mental break and lecture Jon about what’s good vs. what isn’t good.

Will Grey Worm Captain An Award-Winning Volleyball Team On Naath?

Grey Worm pissed me (and the rest of the internet) off this episode, but at least he’s out of Westeros on his way to a very odd beach retreat with the boys. Part of me is happy for him and his newfound peace in Naath, but I’m slightly incensed that this guy that helped kill innocents in King’s Landing gets a happier ending than Jon Snow. Grey Worm, I was rooting for you and Missandei, but sometimes things just don’t work out. Here’s hoping you get a stellar tan and find a great piña colada stand in Naath, though.

Is Bran’s Wheelchair The New Throne?

F*ck Bran and f*ck everyone that voted him into office. Let’s backtrack: if Bran hadn’t been climbing that f*cking tower way back in season 1, he would have been able to mind his own goddamn business and let Jamie and Cersei get their freak on in peace, erasing the need for the war of the five kings,, allowing Robert’s dudes to successfully kill Dany, and letting this whole series never consume my life only to disappoint me and let me down like everything else I’ve ever loved. I mean, Robb would still be alive with a kid and gorgeous wife! So would Joffrey, but, you know, we gotta take the good with the bad, fam. Anyway, f*ck you, Bran, and your weird staring. I hope Drogon comes back and snacks on your crunchy little legs. Speaking of Bran…

Did Bran Know Everything The Whole Time?

…and just piss everyone off with his white Walker hunts and three-eyed-raven bullsh*t and long, lingering stares? What an asshole. So you can see into the future? Why the f*ck didn’t you tell Jon to be more sneaky about killing Dany? Maybe he could have been happy for once in his life! Does that mean nothing to you? Why didn’t you stop Dany from killing millions of innocent people? Was that not on your to-do list for the week? Where do you get off, Bran? Oh, wait—you don’t. You knew that this whole thing ended up with you on the throne, and yet you continued to f*ck around with everyone’s thoughts and feelings for several seasons while we all waited for you to do SOMETHING, ANYTHING worthwhile. What was the actual point of revealing that Jon was a Targaryen? I’m glad Tyrion christened you “Bran the Broken” cause it’s not even a cool nickname and, honestly, you don’t deserve anything cool anymore.

…and is he getting enough pets up north? Even if the entire rest of the episode (and season) was a dumpster fire, the fact that Jon gave Ghost pets and snuggles made everything kind of okay. I’m willing to overlook the absolute piss writing just for the good boi moment in the gif above. Further, I’m really glad to see that this season’s entire budget went to CGI Ghost and CGI not-such-a-good-boi Drogon instead of character development. I’ll miss you both; keep it real.

Do The Unsullied Moonlight As Civil Engineers?

…cause that Hand of the King room looked like it definitely didn’t get blown to sh*t a few weeks prior. I know it takes roughly six months to address the potholes on my road, so, just saying. In the beginning of this episode, I’m 90% sure that roughly 75% of King’s Landing—especially the Red Keep—was beat to sh*t. Are we to assume that instead of getting right on building a hospital (and burn ward), the carpenters, stone masons, and civil engineers of Westeros went right the f*ck to town on the room where rulers can keep rulin’? I mean, maybe there’s literally no one left, so, ya know, no real need for a medical unit at this point. I guess I’m just kind of surprised at the level of priorities here.

Who Was Braiding Dany’s Hair After Missandei Died?

I know from rewatching this series several times that Dany’s elaborate Coachella-worthy braid crowns were the handiwork of our fav multilingual betch, Missandei (RIP). So, once The Mountain and Cersei decided to make the former citizen of Naath a head shorter, who was doing Dany’s hair? It looked pretty fetch while she stood and addressed the Dothraki and Unsullied in episode 6. More so, it looked super grool while she rode Drogon and destroyed King’s Landing in episode 5. Are we to believe that Jon’s talents include hair plaiting and accessorizing? Seems like more of a Varys thing, but whatever. Or maybe it was Pod all along! Honestly, that makes the most sense to me.

Let me know in the comments any other burning questions that the Game of Thrones writers didn’t have time to answer. Other than that, it’s been real!